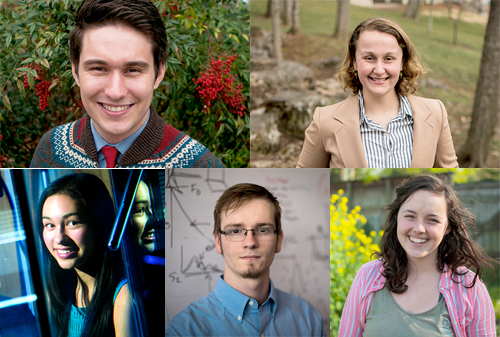 Five WKU students have been recognized in three of the most competitive national award competitions.

One student earned an honorable mention in the Udall Scholarship competition: Alexis Corbin of Lawrenceburg.

The Harry S. Truman Scholarship is open to university juniors who plan to pursue careers in government or elsewhere in public service. The $30,000 scholarship funds graduate education and provides a range of professional opportunities for students who have a demonstrated record of leadership, service, and academic excellence.

Richey, a political science and Asian religions and cultures major and member of the Honors College, is the son of Jeff and Lorie Richey. He is president of the Student Government Association and student regent on the WKU Board of Regents. Richey is the founder and chair of the WKU Student Coalition for Renters’ Rights, an organization that advocates for adequate legal protection for renters in the Commonwealth of Kentucky. With plans to pursue a career in public service, Richey interned in the summer of 2015 in the Public Affairs Section at the U.S. Embassy in Beijing, China through the Department of State Internship Program. He is also the national YMCA College Youth in Government Speaker of the House of Representatives and a member of Phi Gamma Delta.

Hezik, a self-designed sustainable agriculture major and member of both the Chinese Flagship Program and Honors College, is the daughter of Bernard and Judy Hezik. Hezik is a past recipient of the Environmental Protection Agency Greater Research Opportunities Fellowship, the Critical Language Scholarship, and the Benjamin A. Gilman International Scholarship. During her time at WKU, Hezik has studied in China three times, twice in Ecuador and Iceland, and once each in Sweden, Denmark and the United Kingdom. She also volunteered at a permaculture farm in Taiwan and completed a research internship in the British Virgin Islands. On campus, she serves as a Project Grow fellow, assisting with the campus community garden, and on the Student Government Association sustainability committee. She also volunteers with the Community Farmers Market in Bowling Green. Hezik received the 2015 President’s Award for Sustainability at WKU. She plans to promote sustainable urban agriculture in her career.

Pedersen, a student in the Carol Martin Gatton Academy of Mathematics and Science, is the daughter of Paul and Anne Pedersen. Pedersen began research with Dr. Steve Huskey of the WKU Department of Biology in Spring 2015. Her work focuses on the kinematics of stingray envenomation. She plans to pursue a PhD in biological engineering and work in research and development with a focus on biomimicry. Beyond her research with Dr. Huskey, Pedersen has studied abroad in Costa Rica and England and participated in service work in Peru.

Wallace, a biochemistry and chemistry major and member of the Honors College, is the son of Keith and Jennifer Wallace. Wallace conducts research with Dr. Matthew Nee of the WKU Department of Chemistry. Since Spring 2014, his work has centered on using Raman spectroscopy to better understand photocatalytic reactions that might be utilized to remove common organic pollutants in wastewater. He plans to pursue MD and PhD degrees, focusing on biochemistry. It is his aim to conduct translational research as a faculty member at a medical college and contribute to the development of treatments for neurodegenerative disorders. Outside of the laboratory, Wallace serves as president of the WKU Chemistry Club and tutors Gatton Academy students in chemistry.

Pedersen and Wallace were among the seven Kentuckians who received honorable mentions or were named scholars this year. The Barry Goldwater Scholarship and Excellence in Education Foundation received 1,150 applications from sophomores and juniors attending 415 colleges and universities in the U.S.

The Udall Foundation awards scholarships of up to $7,000 each to college sophomores and juniors for leadership, public service and commitment to issues related to American Indian nations or to the environment. A 15-member independent review committee selected this year’s group of Udall Scholars on the basis of commitment to careers in the environment, American Indian health care, or tribal public policy; leadership potential; record of public service; and academic achievement.

Corbin, a geography/environmental studies and Asian religions and cultures major and member of both the Chinese Flagship Program and Honors College, is the daughter of David and Jessica Corbin. Corbin has volunteered at a permaculture farm in Taiwan, interned with the community garden program TopCrops, which works with the Bowling Green special needs community, and serves on the Student Government Association sustainability committee. She also works for the WKU Office of Sustainability, assisting with green tours, management of the campus community garden and organization of the Earth Day festival.

This year the Udall Foundation received 482 applications from 227 colleges and universities. Sixty students were named Udall Scholars. Corbin was among the 51 students from across the U.S. who received honorable mentions in the competition.

WKU’s applicants work closely with their faculty mentors and the Office of Scholar Development. Each of these competitions limits the number of students that universities and colleges can nominate, and WKU must host an internal competition to select institutional nominees. Faculty from across the university and numerous community volunteers helped to select WKU’s nominees and prepare the university’s Truman finalists for interviews.

“The Truman, Goldwater and Udall foundations seek students who are not only academically talented but are also already using those talents in public service, through research, or in service to sustainability or indigenous communities,” said Dr. Audra Jennings, director of the Office of Scholar Development at WKU. “Our nominees, working alongside dedicated faculty and staff members, found opportunities to engage in meaningful research, leadership and service, using the skills and tools of their disciplines to contribute to the process of developing solutions for a range of important problems. It is always a pleasure to work with such a talented and committed group of students as well as with the faculty who mentor them and the faculty, staff and community volunteers who assist our office in preparing our candidates for national competition.”