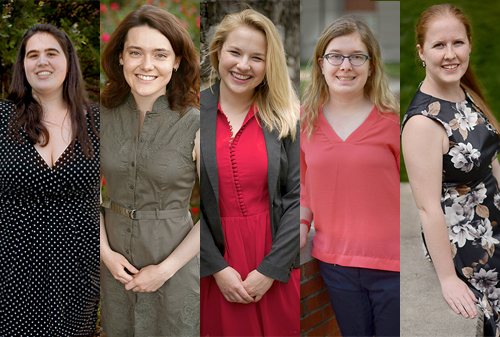 All five of WKU’s applicants for David L. Boren Scholarships have received awards that will provide up to $20,000 for a year of study abroad.

Sarah Cook of Louisville; Mackenzie Donoghue of Southern Pines, North Carolina; Megan Laffoon of Louisville and Kelly Tursic of Springfield, Ohio, are members of the Chinese Flagship Program and will complete the Capstone Year of their programs in Nanjing or Beijing, China. Ella Shipp of Owensboro will study in the AMIDEAST Education Abroad Program in Jordan. All five are members of the Honors College at WKU.

Cook, a double major in Asian religions & cultures and international affairs, is the daughter of Julie and Tom Cook. Her Capstone Year in Beijing will be her second time abroad; previously she spent a summer in the intensive International Chinese Language Program in Taiwan. Exploring China’s approach to concepts of autonomy and sovereignty in East Asian politics courses has helped shape Cook’s plans to pursue a career analyzing public opinion in the Bureau of Intelligence and Research in the Department of State.

Donoghue, a double major in Asian religions and cultures and Chinese, is the daughter of Jamie and Andrea Donoghue. In addition to participating in the intensive language program Princeton in Beijing in 2014, she is a 2015 recipient of the State Department-funded Critical Language Scholarship. Donoghue anticipates pursuing a career that facilitates cooperation between American federal agencies and humanitarian organizations regarding child welfare.

Laffoon, a biology major, is the daughter of Jeannie and Glen Laffoon. She is a 2014 Goldwater Scholar and recently presented results of her WKU Honors thesis, “Potential Application of Hugelkultur to Increase Water Holding Capacity of Karst Rocky Desertified Lands,” at the International Symposium on Sustainable Development in Water Resources and Ecological Environment in Guangzhou, China. She plans to pursue a career helping government officials in the U.S. and China draft effective plans to preserve natural resources while mitigating the effects of environmental abuse.

Shipp, a triple major in Asian religions and cultures, Arabic and history, is the daughter of Laura Shipp. In addition to studying abroad in Belgium, Morocco and Cuba, she attended the University of Texas at Austin’s intensive Arabic Summer Institute. She inherited a love of history, foreign language and international relations from her great-uncle and WKU Distinguished Alumnus Dr. Lowell Harrison. Shipp has begun learning several other languages, including Russian, and plans to pursue a career in the State Department working at the intersection of American, Russian and Arabic-speaking countries’ interests.

Tursic, a triple major in international affairs, Spanish and Asian religions and cultures, is the daughter of Richard and Katherine Tursic. She received a Cherry Presidential Scholarship as a first time freshman in 2013, participated in the intensive Princeton in Beijing language program in 2014, and received a Critical Language Scholarship to study in China in 2015. She is conducting research for an Honors thesis on the changing relationship between the Chinese government and non-governmental organizations, and plans to pursue a career in intelligence analysis.

WKU’s performance is noteworthy in a national context. This year, 820 students from across the country applied for Boren Scholarships and 165 were awarded, an approximately 20 percent selection rate.

“The most competitive applicants for Boren scholarships are those who engage in research in their disciplines alongside language study. In departments of political science and philosophy & religion, agriculture and geology and history and modern languages, these students have explored and developed interests that are laying out clear paths to federal service careers,” said Melinda Grimsley-Smith, coordinator of international scholarships in the Office of Scholar Development.

David L. Boren Scholarships are sponsored by the National Security Education Program (NSEP), a major federal initiative designed to build a broader and more qualified pool of U.S. citizens with foreign language and international skills. In exchange for funding, Boren award recipients agree to work in the federal government for a period of at least one year.

Boren Scholars represent a vital pool of highly motivated individuals who wish to work in the federal national security arena, and program alumni are contributing to the critical missions of agencies throughout the federal government.

About the Office of Scholar Development: The OSD works with students and their mentors to build research and creative agendas, helps students identify appropriate national and international scholarship opportunities, and provides intensive writing support throughout the application process. OSD staff welcome the opportunity to speak with students about nationally competitive scholarships.