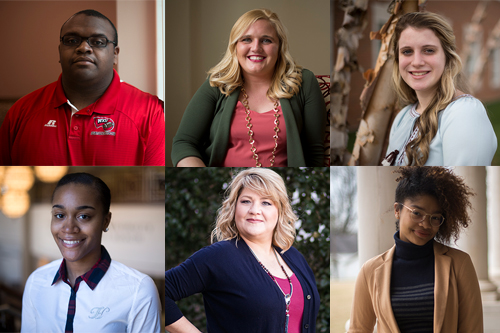 Anders, a third-year biology major, is the son of Becky and Floyd “Jose” Anders.  He will be studying in Japan this summer with the Kentucky Institute for International Studies. Anders plans to attend medical school after graduation.

Estep, a third-year marketing major, is the daughter of John Estep and Kelly and Michelle Harding and the mother of 10-year-old Kenlee. Estep will be studying in Stellenbosch, South Africa, where she will be participating in a service learning program focused on sustainable community engagement. “As a non-traditional student and a single mother, I would have only dreamed of studying abroad without the help of the Office of Scholar Development,” Estep said. “The Gilman Scholarship has opened a door to allow me to study abroad this summer.”

Fisher, a third-year biology major, is the daughter of Vicky and Jerry Mathis. She will be studying public health in Tanzania this summer. Fisher plans to attend medical school after graduation.

Hurst, a second-year special education major, is the daughter of Nicola Hurst. She will be studying in Costa Rica with the Kentucky Institute for International Studies.

Reeves, a third-year healthcare administration major, will be studying abroad in Tanzania this summer. Her family includes her husband Mitch Reeves and her two children Emily and Robbie.

Watkins, a third-year social work major, is the daughter of Shannon Neal and Keith Carter. She will be studying social work in Tanzania through the Kentucky Institute for International Studies.

“All six Gilman recipients will be able to take their studies abroad and will be better prepared for an increasingly globalized workforce,” Cory Dodds, Coordinator of Nationally Competitive Opportunities for the Office of Scholar Development, said. “Our students’ successes in the Gilman Scholarship competition are a credit to WKU faculty and staff who recognize the importance of studying abroad in non-traditional destinations.”

Each of the students worked with the Office of Scholar Development at WKU in preparing their Gilman Scholarship application and with the Office of Study Abroad and Global Learning to find the best academic program abroad to fit their goals. The students applied last fall during an early application cycle. Students seeking to study abroad this summer or fall may still apply for the Gilman Scholarship before March 7.