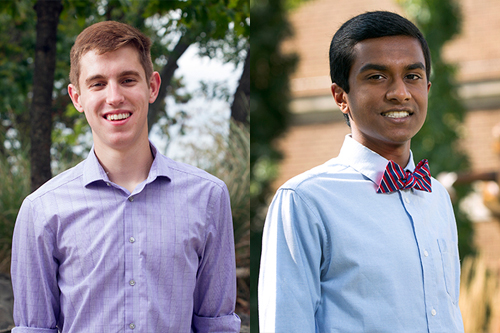 Two WKU students have been honored by the Barry M. Goldwater Scholarship and Excellence in Education Program, the premier award for undergraduates pursuing careers in science, mathematics or engineering.

Andrew Davis of Williamstown was named a Goldwater Scholar. He was one of only two students from Kentucky to receive a Goldwater scholarship this year. Ayush Prasad of Flatwoods received an Honorable Mention in the competition.

“We are very excited for Andrew and Ayush on their recognition,” said Dr. Kevin Williams, professor of Chemistry and WKU’s faculty representative for the Goldwater Scholarship Program. “We have had 11 consecutive years now with at least two students being recognized in this competition as a result of excellent effort by both the students and the faculty.”

Davis, the son of Amy and Todd Davis, is studying mathematics and physics and is a 2016 graduate of The Carol Martin Gatton Academy of Mathematics and Science in Kentucky. He plans to pursue a PhD in mathematics and conduct research in modeling using linear algebra, algebraic systems and topology, and teach at the university level.

Davis has conducted research with Dr. Bruce Kessler, professor of Mathematics and department head, since August 2014 and has published work with Dr. Kessler in The Mathematical Scientist.

“As Andrew’s research supervisor, I can only say how lucky I have been to get to work with him over the last three years,” Dr. Kessler said.  “I’ve gotten to see him grow as a student, as a researcher and as a person over that time, and I’m glad that he is getting this recognition.”

Prasad, the son of Yogendra Prasad and Aparna Singh, studies biology as a WKU sophomore and Gatton Academy of Mathematics and Science student. His goal is to earn a PhD in computational biology as well as an MD and conduct clinical research utilizing mathematical modeling to develop treatments for cardiovascular diseases as a faculty member at a medical college.

“Being recognized by the Goldwater Foundation is an incredible honor for Ayush,” Dr. Schugart said.  “His hard work and interest in learning beyond the classroom environment is why he received this recognition.  I am extremely happy for Ayush.”

Both students have conducted extensive research with faculty in the Department of Mathematics. Dr. Kessler noted, “I am overjoyed with the news that students conducting research with our department’s faculty have received both a Goldwater Scholarship and an Honorable Mention in the Goldwater competition, respectively.  We have quality faculty working with quality students, and this announcement serves to validate that statement.”

Established by the U.S. Congress in 1986 to recognize the former senator from Arizona, the Goldwater Scholarship program identifies and honors university sophomores and juniors who excel in STEM (science, technology, engineering, mathematics) research. To support future career researchers, winners receive $7,500 annually to apply toward undergraduate tuition, room and board, fees and books. This year 1,286 students from 470 institutions were nominated for a Goldwater scholarship. Each school can nominate just four students. Of those nominees, 240 were named Goldwater Scholars and 307 were identified as Honorable Mentions.

Since 2007, 34 WKU students have been recognized in the Goldwater Scholarship competition.