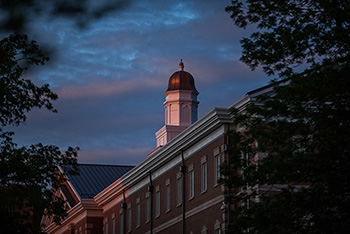 The James Madison Fellowship Foundation annually selects one fellow from each state, the District of Columbia, and U.S. territories. Fellows receive $24,000 to fund graduate education to become outstanding teachers of the American Constitution at the secondary school level.

Bryan earned an undergraduate degree in social studies and history in 2009 and a master’s degree in school counseling in 2012 from WKU. He was a student in the Mahurin Honors College and an active member of the Student Government Association, in which he served three consecutive terms as Executive Vice President.

“I applied for the Madison Fellowship because I want to learn more about the Constitution and ways to instruct my students,” Bryan said. “Students need to understand how, as a governing document, it provides a framework for how our citizens will be governed.”

Bryan teaches social studies at LaRue County High School (LCHS) in Hodgenville. He was selected as McConnell Teacher Scholar in 2016, which included continuing education in civics and a trip to James Madison’s Montpelier in Virginia. In addition to introduction to social studies, Bryan teaches Street Law, in which students study criminal justice, American government, psychology and sociology.

“Mr. Bryan became my mentor and taught me one of the most valuable lessons that I have ever learned: education is a never ending process,” Austin Barnes, current WKU student and Bryan’s former student, said. “He exemplifies this lesson; he is constantly working and learning to become a better educator, mentor, and person.”

Bryan’s fellowship begins with a summer institute at Georgetown University in Washington, D.C. He will study the foundations of American constitutionalism, explore historic sights, and meet a sitting Supreme Court justice.

“I continue to be impressed by the way that Kendrick meshes his scholarly, professional and civic activities into a coherent whole,” said Dr. Eric Reed, professor of history at WKU. “I am sure that quality impressed the Madison Foundation reviewers, too. Kendrick is a very worthy winner of the fellowship.”

“I believe Kendrick is an excellent choice for the Madison Fellowship,” Dr. Joel Turner, assistant professor of political science at WKU, said. “Kendrick is uniquely able to reach young people regarding the importance of civic responsibility, and this fellowship will help make him even better at this noble endeavor.”

Spalding earned an undergraduate degree in social studies, history and Spanish from WKU in 2015.  She was a student in the Mahurin Honors College and previously received an Honorable Mention from the Madison Fellowship. She is pursuing master’s degrees in education and history at WKU.

“Shelley is an outstanding history graduate student, one who possesses the talent and passion to pursue a meaningful career as a high school teacher,” Dr. Patricia Minter, associate professor of history at WKU, said. “She writes elegantly, frames important and innovative questions, and delivers thoughtful, high-quality work.”

“Shelley’s work on the history of female infanticide demonstrates how thoughtfully and rigorously she applies international laws and standards to bring to life issues of human rights and legal justice,” Dr. Marko Dumančić, associate professor and director of graduate studies in the History Department at WKU, said. “It is this talent that doubtlessly brought her the recognition from the fellowship selection committee.”

Both Bryan and Spalding worked with the Office of Scholar Development at WKU in preparing their Madison Fellowship applications.

“Kendrick and Shelley demonstrated their commitment to teaching constitutional history to positively impact their students’ understanding of American politics, government and their civic duties,” Cory Dodds, Coordinator of Nationally Competitive Opportunities in the Office of Scholar Development, said.  “Their recognition is a credit to their hard work and the history, political science and education faculty at WKU.”