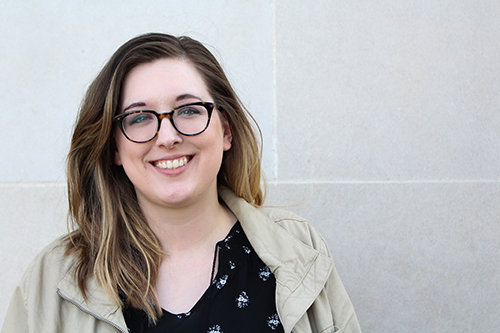 WKU alumna Claire Bellar was selected as a 2018 James Madison Fellow.  She graduated from WKU in 2016 with degrees in social studies and history and currently teaches social studies at Warren East High School.

The James Madison Fellowship Foundation annually selects one fellow from each state, the District of Columbia, and U.S. territories.  Bellar will receive $24,000 to fund graduate education to become an outstanding teacher of the American constitution.

“Claire is a very deserving recipient of the Madison Fellowship,” Dr. David Lee, provost and professor of history at WKU and Bellar’s mentor, said. “She’s committed to giving her students the strongest possible education in history and political science in order to prepare them to be responsible citizens of the Commonwealth.  The Madison Fellowship will help her to do just that!”

After completing a master’s degree in history at WKU, Bellar plans to teach dual credit courses at Warren East High School.  She said: “When American students have knowledge of the Constitution and its role in American history, they have knowledge not of their legal limits, but of their individual possibilities as American youth and global citizens.”

In addition to teaching social studies, Bellar advises the Y-Club, through which students participate in a mock Kentucky legislature and Kentucky United Nations Assembly.

“Ms. Bellar is an outstanding teacher!  She takes her role as mentor and teacher very seriously,” Nicole Clark, principal of Warren East High School, said.  "She loves her content and passes that love onto her students on a daily basis.  Having Claire represent Warren East as a James Madison Fellow is a great honor for us!  We are proud to have her as a Raider educator!”

Bellar sought guidance from Mr. Cory Dodds, coordinator of nationally competitive opportunities in the Office of Scholar Development, in preparing her application.