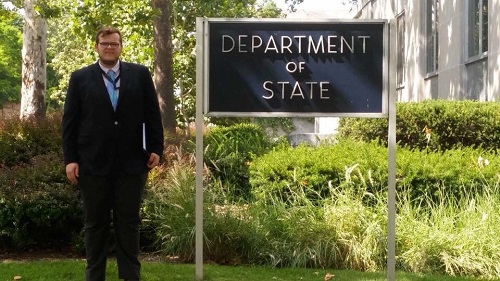 WKU senior Erick Murrer Jr., of Nancy, Kentucky, has been selected as a Thomas R. Pickering Foreign Affairs Fellow, one of the most competitive and prestigious programs offered by the U.S. Department of State. Murrer is a Mahurin Honors Program student and a double major in Economics and Chinese.

Funded by the U.S. Department of State and administered by The Washington Center for Internships and Academic Seminars, the Pickering Fellowship Program provides graduate students with up to $37,500 annually in financial support for a two-year master’s degree in a field related to the Foreign Service. Additionally, the Fellowship offers internships, mentoring, and professional development to prepare students for a career with the Department. Upon successful completion of the program, Pickering Fellows have the opportunity to work as a foreign service officer based on the needs of the State Department, serving either in D.C. or at a U.S. embassy, consulate, or diplomatic mission around the globe.

“I am completely floored by this opportunity,” Murrer said. “I am the first Pickering Fellow from WKU, and I am so humbled to have been chosen. Two years ago, I was selected as a U.S. Foreign Serve Intern completing a two-summer, paid internship program. I owe this success to WKU’s Diplomat-in-Residence, Michael McClellan. His mentorship and guidance refined me as an applicant and the rest was able to fall into place.”

While Murrer and the State Department are still negotiating the terms of his scholarship, he does know that he will either serve in D.C. or in Boston as he studies International Affairs with a specialization in international economic affairs. He also desires to complete a Jewish studies program. His scholarship will provide complete funding for his academic studies.

“Erick Murrer is a very bright, highly engaged, and dedicated leader of our College and WKU,” said Dr. Jeff Katz, Dean of the Gordon Ford College of Business. “His selection to serve as a Pickering Foreign Affairs Fellow is direct evidence of his potential for making our world a better place.”

Murrer said his selection as a Pickering Fellow shows that there is hope for future students who are like him.

“As someone from a disprivileged background being low-income, LGBT, and Appalachian, I am now able to give back and represent my communities on an international stage,” he said. “This expresses volumes to the American spirit. I would like to thank my mother, Sherri, and my father, Erick, for their support. I also am forever grateful for the support of Dr. [Cathy] Carey and the GFCB for preparing me for this career of a lifetime,” Murrer said.

The career of Murrer’s lifetime will begin when he is only 24 years old. He said he hopes to serve his first Foreign Service tour in Uruguay, where he can also utilize his Spanish skills.

“Both my undergraduate and graduate education centering around the interplay of international affairs and economics will prove useful in drawing upon a broad knowledge and cultivated skill set,” he said. “I will have a nuanced, complex understanding of foreign policy issues due to my technical background and many State Department experiences.”