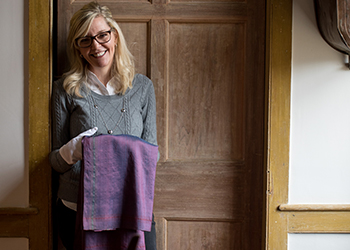 “My grandmother always said, ‘If you can sew you can always make money.’ ”

As an undergraduate at WKU in the mid-1980s, however, Carrie Cox wasn’t really sure how to make that happen.

“When I came here as a freshman I had no idea what I wanted to do. All I knew is that I could sew, but I didn’t know how that could be a career,” she said.

Over the past 30 years, Cox has taken her love of sewing, history and clothing and stitched together a career in teaching and research. She returned to WKU in 2015 as an assistant professor of Fashion Merchandising and even teaches the introductory course, Perspectives of Dress, where she discovered the first piece of her career on a trip to the Kentucky Museum.

“I saw all of those historic costumes and I was like ‘I want to do that. Is that a job or something?’ I found out it’s called a curator,” Cox said. “I always liked the history of clothing, I liked the history of textiles and I liked sewing so those were the major emphasis for my major. Then I changed from a French minor to a folklore minor because they focus on material culture.”

The next piece was added when Cox was selected for an internship at Shakertown, where she learned about the Shaker community’s production of silk and silk kerchiefs. She wrote a research paper on one of the silk kerchiefs for a folklore class.

“I always wanted to do museum work and be a curator of clothing and textiles or historic collections. That was always my dream job,” said Cox, who received her bachelor’s degree in Textiles and Clothing in 1988 and a master’s in Folk Studies in 1990 at WKU. “But then I ended up getting a Ph.D. in Textile and Apparel Management from the University of Missouri.”

While at Missouri, Cox studied 1920s women’s dress and completed her dissertation – “The Meaning of 1920s Dress for Small Town Women: Flappers, Styles and Sources of Clothing” -- in 1999. “For my dissertation I interviewed women who were teenagers in the ’20s. I interviewed 12 women who were from Columbia, Missouri, who had grown up there, gone to school there. It was a labor of love. I captured those memories from women who are now gone.”

Cox continued to add pieces over the years as she moved with her husband and daughter to Murray. Since returning to WKU’s Department of Applied Human Sciences, Cox has taught and teaches several fashion and clothing courses and has revisited her research interest in the Shaker silk kerchiefs.

Cox presented that work, “The Shaker Sisterhood and their Fabric of Faith: The Silk Kerchiefs of South Union,” recently at the Costume Society of America’s national conference at Colonial Williamsburg.

The silk kerchiefs are one example of the industrious religious community that existed at South Union from 1807 to 1922. The Shaker Village included farming operations, seed business, orchards, mills, furniture, silkworm industry and more. “They were progressive,” Cox said. “If there was a better way, they did it. They were inventors. They didn’t reject technology.”

The production of the silk kerchiefs was a labor of love for the sisters in the community, Cox said. The worms were fed with leaves from mulberry trees planted at South Union. One worm could produce up to two miles of filament or fiber from one cocoon.

South Union has about 15 silk kerchiefs in its collection. A closer look at the kerchiefs reveals the detail in the craftsmanship from the natural dyes used to color the silk to the patterns used in weaving them, even complicated patterns like twill and herringbone.

In addition to her presentations, Cox is able to share her research and love of the Shakers and 1920s fashion with her students to show them how lifestyles have changed in the past century and how garment production has become an industry worth billions and billions of dollars.

“I work very hard to convince people that the apparel industry is important.  I remind them that you didn’t wake up and make your clothes,” she said. “You don’t even know where they came from. You just get up and put them on. That’s the luxury we have, but historically we didn’t have that. We made our clothes. It’s such an important industry.”

Students will get an inside look at the industry during a May term Study Away course when Cox takes them to New York City for a tour of fashion and design centers. The course provides a variety of opportunities for students to meet professionals and gain firsthand knowledge concerning design, production, marketing, and promotion of textiles, clothing, and home furnishings.

“We want our students to understand how a garment is put together. You can’t put on belt loops with until you have waistband. There’s a logical progression of how things are put together.”

Cox also wants her students to understand that modern, futuristic designs have been influenced by historic fashion. “History always informs us or inspires us. I’m not a designer myself but students can take designs and create something new,” she said.

But, she cautions, not everything old needs to be new again. “I hope that ‘80s fashion doesn’t come back. It was terrible. The textbook we use for 20th Century Fashion titles the chapter on ‘80s fashion as ‘anti-fashion.’ From neon colors, to mall bangs, to oversized shoulder pads, the ‘80s included styles that may need to stay in the ‘80s.”