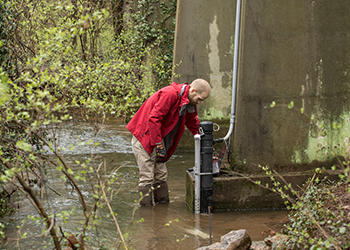 In a previous project, WKU Graduate student James Shelley discovered many problems related to the design, maintenance, and siting of Class V Injection Wells which are drilled wells into the limestone bedrock in Bowling Green, Kentucky and other places having karst topography, where stormwater can be directed underground into caves and cracks in the rock, eventually becoming part of the groundwater system. This led to further research.

“I could see how these poorly regulated stormwater controls impacted communities and the karst environment through flooding and groundwater contamination,” Shelley said.  “Additionally, due to a lack of research, karst flooding is poorly understood, and I saw this project as opportunity to make a novel, and meaningful contribution to karst science.”

Shelley’s research titled, “Modeling and Evaluating the Influences of Class V Injection Wells on Urban Karst Hydrology,” will use data to better evaluate the current hazard mitigation strategies and emergency preparedness procedures in relation to karst flooding to ensure that high-risk areas are accounted for in their planning and zoning ordinances.

“Honestly, when I first came to WKU, I had no idea about what I wanted to do with my life. After a year of exploring options, I looked through the course catalog and chose the coolest sounding program I could find, which was Karst Geoscience,” Shelley said.

“Doing research on urban karst flooding has been very rewarding and has allowed (forced) me to develop a lot of new skills. It has been frustrating and confusing at times, but I feel that it has prepared me for life after graduate school and provided me with applied skills that can be used across a range of careers.”

Doing research on this subject has allowed Shelley the opportunity to travel, meet, work with top experts in his discipline. Shelley presented his research at the Kentucky Water Resources Research Institute Annual Meeting in Lexington last weekend. He has received funding from the Kentucky Water Resource Research Institute through the USGS 104b program, the WKU Graduate School, and support from the City of Bowling Green Public Works.

Shelley’s thesis advisor, Dr. Jason Polk, commented “James is very humble overall just a positive and eager person interested in improving the quality of life for those around him by undertaking this project, which involves a significant amount of fieldwork and data processing of more than 20 million data points, to help alleviate flood hazards in urban karst areas. It is rare to see such a combination of dedication, skill diversity, and creativity in a student, all of which make James outstanding to work with and I am incredibly proud of his accomplishments.”

Like many students, Shelley had no idea what karst was then, but it did not stop him from learning more about it. “I’m glad I did, because it has allowed me to apply all of things I love about science and math to understanding a small part of the world around me.