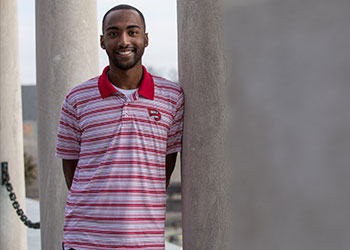 “Don’t be afraid to step outside your comfort zone. Find those diverse experiences, those diverse opportunities that allow you to be unique and allow you to stand out from the rest. At the end of the day, that’s what we’re all here to do,” WKU graduate student Andre Dowell said. “We’re here to gain those resources and skills that will make us the best leaders we can be post-graduation. This is what is going to prepare us to bring change where change is needed.”

Dowell, a graduate student from Brandenburg, Ky., completed his bachelor’s degree at WKU in Elementary Education. He is currently in the Master of Arts in Education, Counseling and Student Affairs in Higher Education Program at WKU. Dowell said he decided to go into student affairs after he discovered that he enjoys working on a college campus and has a passion for student programming, development, success and advocacy.

Dowell is no stranger to taking advantage of diverse opportunities and getting engaged and connected on campus. He speaks from experience.

As a college freshman in the fall of 2013, he quickly became involved in his fraternity, Alpha Tau Omega and the M.A.S.T.E.R. Plan Orientation Program. Later in his undergraduate career, he had the opportunity to serve as the first logistics chair for the Western Leaders Advisory Board, intern for the Student Activities Office, and was instrumental in establishing the Hilltopper Parents Ambassador Program.

Dowell also became the first African American chapter president of Alpha Tau Omega chapter at WKU. As chapter president, he was responsible for representing the group as a whole and serving as liaison between the chapter, national fraternity, alumni and campus community.

As a graduate student, he continues to serve as a Hilltopper Parents Ambassador. He also works as a graduate student in the Downing Student Union Operations Office and a Graduate Intern for the Academic Advising & Retention Center.

“I really enjoy student programming. Over winter break I was scrolling the internet, researching some programming ideas when I came across a Black His Story/Black Her Story bulletin board. I started thinking about how I wanted to bring this concept to WKU, but I wanted to make it more recognition based. I wanted it to showcase African American leaders on our campus through WKU’s social media channels,” said Dowell. “My vision was inspiring students through telling the stories of the excellent work African American leaders are doing on our campus.”

Dowell plans to complete his master’s program, earn his Ph.D., and launch a career in student affairs that will lead him down the path to becoming a university president or dean of students.