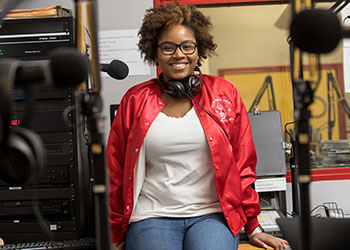 WKU broadcasting senior Ambriehl Crutchfield has accomplished a great deal in her short time since coming to WKU from Nashville.

Crutchfield serves as a multimedia reporter for the WKU Herald, is a magazine writer for the WKU Talisman, holds a community service position with NPHC, and is a member Delta Sigma Theta. She is a former Spirit Master and has previously held positions on the Campus Activities Board. She also hosts an award-winning podcast, the Unity Podcast, that has been recognized by the Associated Press.

Crutchfield is connected and active across campus, but when she first arrived at WKU, that wasn’t the case.

“When I first got here, I feel like I was less organized of a person and didn’t have a clear path,” said Crutchfield. “But I met a lot of people who helped to guide me and show me opportunities… As I joined organizations, I learned more and decided what I want my future to look like. That’s when I narrowed in on wanting to do journalism and get more heavily involved.”

Narrowing her focus has allowed Crutchfield’s passion of helping others to flourish. She uses her skills to tell stories that connect others on a fundamental level.

“As a journalist, I like to do stories on communities that are underrepresented and show why they’re important or what commonality we all have,” Crutchfield said. “As different groups of people, you sometimes think that people are different and you just kind of x them out, but we all have some common traits between us.”

Crutchfield strives to use her confidence and connections to inspire others. “I’ve been very fortunate to be around people and opportunities that have helped mold me,” she said. “I really want to use my platform and the opportunities I’ve had to empower other groups of people, lift them up, and show them that being you, being bold about who you are, is the best way to be.”