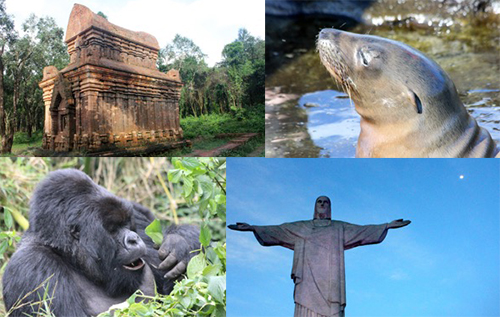 Dr. David Keeling, Distinguished University Professor of Geography in WKU's Department of Geography and Geology, returned recently from his 12th circumnavigation of the planet, completing a three-week around-the-world tour of Asia, Africa and South America, covering about 30,000 miles and representing WKU and the American Geographical Society as part of a geographic educational outreach program.

The educational tour began in Kyoto, Japan, with discussions about Japanese demographics and the growing challenge of an ageing population that is likely to see Japan’s population fall by over 30 million within a generation or two. Dr. Keeling also talked about the short-term prospects of continued economic growth for modern Japan as it faces a declining workforce.  In Vietnam, the group visited Hoi An and the Champa ruins of My Son, a site that was carpet-bombed by U.S. forces in 1969 during the Vietnam War, destroying many of the temples.  Vietnam faces the opposite demographic challenge of Japan, with few elderly people and a bulging youth population that requires education, health and economic opportunities.  Vietnam is a welcoming country for Americans and the people are optimistic and hopeful about their future role in the Southeast Asian region.

In the idyllic islands of the Maldives, off the coast of Sri Lanka and India, Dr. Keeling lectured about Island Geographies and the challenges faced by small island communities in the face of sea-level rise and coral bleaching.  Twenty years ago, the Maldives government aimed to become a totally “green” society, but recent governments have decided that money generated by tourism is much more critical to the future of the island country. Islands have been sold off to foreign investors, indigenous residents have been relocated or threatened with relocation, and the government aims to increase the current number of visitors from 1.5 million to 8 million over the coming decade. Can the vulnerable island society sustain and survive such a radical shift in economic and environmental priorities?

On the flight across the Indian Ocean and East Africa to Rwanda, he lectured about the Rwandan genocide and the political-economic causes of the conflict. Rwanda has recovered significantly from those nightmare events in 1993, with new investments in gorilla tourism, commitments to environmental sustainability (plastic bags are banned), and monthly community workgroups to clean the environment and resolve local conflicts. The group participated in a gorilla trek to experience the amazing Virunga Mountain gorillas, made internationally famous by Dian Fossey’s research and the film Gorillas in the Mist.

Flying across Africa to the group’s next destination, Casablanca in Morocco, Dr. Keeling introduced everyone to the distinctive sounds and rhythms of Moroccan music. The group visited the Hassan II mosque, the third largest in the Islamic world, and enjoyed a festive dinner at Rick’s Café, made famous by the Bogart/Bergman movie, Casablanca. The restaurant is a faithful reconstruction of the location featured in the movie (actually a set on a Hollywood backlot), financed and run by an American couple, and it features a lively jazz band that always plays “You must remember this….”

On the flight across the Atlantic to Rio de Janeiro, Brazil, Dr. Keeling lectured on the urban redevelopment challenges of the 2016 Rio Olympics and explained some of the infrastructural successes and failures experienced by this metropolis of 13 million people. The group experienced the preparations for Carnival, which was just a week away after our visit, and enjoyed a sunrise breakfast at the statue of Christ on Corcovado mountain.

On the penultimate leg across South America to the Galapagos Islands, Dr Keeling lectured on the life and research of Charles Darwin and his contributions to modern biology and biogeography. The expedition concluded with a four-day exploration of several Galapagos islands experiencing the ecologically naïve wildlife for which the archipelago is famous.

The primary mission of the both the department and the American Geographical Society’s educational travel programs is to focus attention on some of the planet’s most pressing problems, such as the social implications of climate change for island communities, ongoing ethnic and environmental tensions in Asia, Africa and Latin America, and the challenges for emerging societies in engaging with an increasingly Westernized global economy. A secondary mission is to demonstrate how geographers address these issues and to promote a broader geographic perspective on sustainable development issues.

“Learning about environmental challenges first-hand by examining, for example, island communities and their vulnerability to changing resource economies within a local and global development context really helps people to understand the issues of sustainability and global change and puts the challenges we face as a global society into sharper focus,” Dr. Keeling said.

One of the benefits for WKU, Dr. Keeling said, is that the university’s growing international reputation is further enhanced through his participation in these educational tours, as the guests have included diplomats, former ambassadors, Fortune 500 corporate leaders and successful business entrepreneurs. Students also benefit from the knowledge gained from these experiences and subsequently shared in the classroom and through research projects and study abroad programs.

Past educational expeditions have led to successful departmental study abroad programs to Argentina, Tanzania, Turkey, Iceland, Hawaii, and Australia, among other destinations, with an upcoming program planned for the Bahamas (Winter 2019) in partnership with Harvard University and the Global Health Division of Massachusetts General Hospital.