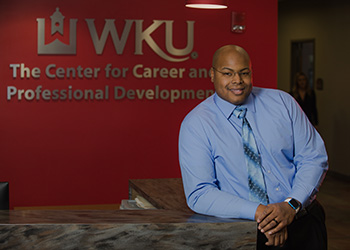 Robert Unseld likes to say, “The difference between a goal and accomplishment is hard work.”

Unseld, a native of Louisville and graduate of Seneca High School, has used that philosophy as an undergraduate (bachelor’s in computer science, 2003) and graduate (MBA, 2007) student at WKU and throughout a career path that has taken him to a position as director of WKU’s Center for Career and Professional Development and the Student Accessibility Resource Center.

“Personally, I’m most passionate about creating an infrastructure of success for my children. Then, in parallel, that’s also what I’m most passionate about here at WKU in terms of students,” said Unseld.  “I don’t think that we serve our students by doing things for them. I think we actually in many cases do more harm. I think it is absolutely necessary that we build a scaffolding that our students can use to climb to their goals.”

Unseld said his family has had the largest influence on his life. “I have had the benefit of growing up in the shadow of great men and women my whole life. Both of my grandfathers were silent heroes. My paternal grandfather was active in the construction business in Louisville. My maternal grandfather was the pastor of small church in rural Kentucky. My aunts and uncles have all had some measure of success that was beyond what I saw on television or in popular media and music.  I am aware of many consequential men and women who are African American that are inspiring and that are amazing role models, but for me it was mom and dad who had the biggest impact.”

Unseld has advice for young African American males coming to WKU for the first time:

“Coming to Western or going into college means that you are signaling two or three things – you want more out of your life, you are open to criticism and you are resilient and determined. If you want to be involved, be those three things. Act as if you want more. Accept criticism without getting angry and shutting down or using criticism as an excuse to disengage from a difficult task. Be resilient and determined because being black does not get any easier. You get better at it, but it doesn’t get any easier. That’s what I tell my sons.”

To reach Mr. Unseld or take advantage of the WKU Center for Career and Professional Development, visit www.wku.edu/career.