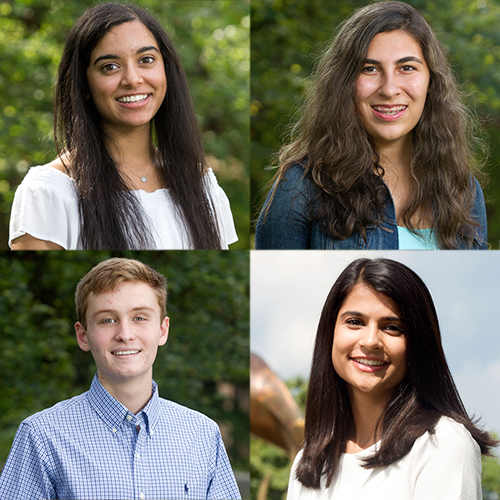 Frankfort second-year student Nikitha Rajendran (Franklin County High School) is an American Voices Nominee and received a Gold Key award for her poem “Dheivam.”  Gold Key awards are given to the very best works submitted to local programs. Gold Key works are automatically considered for national–level recognition. In addition, five works, from across all categories and grades, are selected from those earning Gold Keys as the “Best-of-Show” for each local program and are nominees for the American Visions & Voices Medals.

“While students at The Gatton Academy are selected for admission based on their interests and abilities in science, technology, engineering and mathematics, many of our students are passionate about the arts and humanities, as well,” said Dr. Lynette Breedlove, Director of The Gatton Academy.  “It is very exciting for these students to be recognized for their creative writing.  Each of these four students has a unique perspective on our world and their experience, and they contribute in important ways to our community.”

Since 1923, the Scholastic Art & Writing Awards have recognized the vision, ingenuity, and talent of our nation’s youth and provided opportunities for creative teens to be celebrated. Each year, increasing numbers of teens participate in the program and become a part of our community—young artists and writers, filmmakers and photographers, poets and sculptors, video game artists and science fiction writers, along with countless educators who support and encourage the creative process.