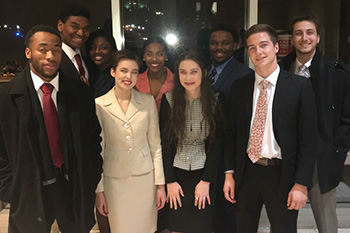 Nine WKU Forensics Team members traveled to Columbus, Ohio, to take part in a tournament hosted by the Ohio State University the weekend of Dec. 1-2.

WKU placed second in team sweepstakes. Other competing schools included Wayne State University, Marian University and Bowling Green State University. Additionally, all nine members advanced to at least one elimination round, and the team took away six of the tournament's 11 individual event championships.

This is the team’s last tournament of the semester. WKU will resume competing on Jan. 27 in St. Louis, Missouri, and Dekalb, Illinois.

While the nine students were competing in Ohio, the rest of the WKU Forensics students and coaches hosted a junior high tournament on campus Saturday (Dec. 2) as 163 fourth- through eighth-grade students from Kentucky, Tennessee and Indiana competed in the WKU Junior Hilltopper Classic.

This weekend, the team will host high school students from all over the country at the annual Senior Hilltopper Classic speech and debate tournament. Approximately 350 students will participate in the competition on WKU’s campus.

Results from the Ohio State University “Holiday Frolic” Speech and Debate Tournaments are as follows: