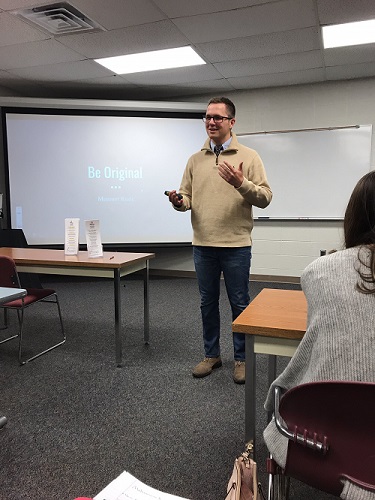 “We are very excited to have Muamer come back and share his experiences with our current students,” said Dr. Dawn Bolton, Director of the Center for Entrepreneurship & Innovation. “Muamer is one of our great success stories!”

Razic graduated from WKU in December of 2016 with his Bachelor’s degree in organizational leadership, and minors in both sales and entrepreneurship. During his stay on the Hill, Razic was successful in his entrepreneurial endeavors. He participated in the spring 2016 Topper Tank Pitch Competition and won first place along with a cash prize of $200 for his business plan idea, Level Lacrosse.

Razic credited the help he received from the Center for Entrepreneurship & Innovation for starting him on his path to success. The Center provided the tools, feedback, and opportunities that he today still utilizes.

“It’s all about being original. Figure out how you work, what motivates you, and then get out there and do it,” said Razic.  That mindset describes how he was able to go so far within student competitions and to currently work on his business idea. He understood that he was a procrastinator, and that working under pressure gave him more time to brainstorm, as well as to motivate him to work more efficiently.

Razic reiterated to students in attendance that they had to just get out there and do it. He shared the quote that he heard from Daymond John, CEO and founder of FUBU, “if you’re going to fail, fail quickly.” He wanted his audience to understand that if they have an idea to just go for it, because if not they will highly regret it down the line.