Twin brothers promote involvement through Building Men of Worth 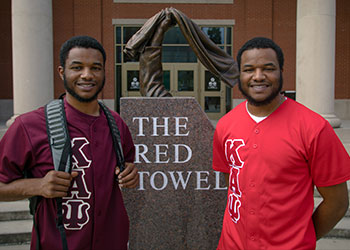 Making a difference in the lives of others is vital to WKU seniors Cam and Chris Currin.  Hailing from Nashville, these twin brothers came to WKU for different majors and have different sets of friends, but they work together to support a common cause that is not only important to WKU, but addresses an important national issue as well.

As the president of Building Men of Worth (formerly Black Men of Western), Cam Currin believes that the key to keeping minority students in college is student engagement and involvement.

“In 2015, I was asked to lead the resurgence of this organization,” said Currin.  “We are dedicated to helping minority males navigate through college and to help with their retention rates.”

Through a series of academic and social events, Building Men of Worth encourages student involvement and accountability.

“This year we have implemented our Brother-to-Brother Hour from 4-5 p.m. on Mondays,” said Currin. “Last semester we all got together and played ball in Preston. Sometimes we get together and study, and if some guys need help, we lead them to the AARC and we make sure that they understand that they have a lot of resources on this campus that can help them academically. Sometimes we just chill and rap…just use it as a venting session to help with whatever stresses our members are dealing with.”

Changing the name from ‘Black Men of Western’ to ‘Building Men of Worth’ was a strategic rebranding effort aimed at addressing the needs of an increasingly diverse WKU campus.

“Although the organization was directed towards minority males, we don’t exclude members of any race.  It has been a challenge.  You have to understand the need on campus is constantly changing,” said Currin.  “To me, it’s not about the name, it’s about what we’re doing. It’s our core values, and none of them have changed, just the name has changed.”

Cam’s twin brother, Chris Currin, concurs.  Chris also serves the organization and has seen a need to increase student involvement across campus through leadership roles in Kappa Alpha Psi fraternity and as the current president of the Campus Activities Board (CAB).  Currin referenced WKU’s Intercultural Student Engagement Center (ISEC) as a positive resource for minority students on campus.

“In order for minority students to get through their undergraduate years, it can be a struggle, but it’s the small things that help us through,” said Currin. “Like ISEC, programs that put minority students in the face of minority professionals who work here, not necessarily just professors, but people who understand the needs of minority students and what we are going through. They are also helping with academic retention rates, giving students study hours, giving them a mentor, meeting up as a group once a month – just little things like that to keep students engaged and keep them wanting to come back to school. That’s going to play a big part in WKU moving forward for minority students,” said Currin.

While the Currin brothers have experienced success through their academic programs, (Cam as a Sports Psychology major and Chris in Broadcasting) and success through leadership opportunities in student groups, such as the WKU Spirit Masters and the Campus Activities Board, they also have the unique experience of attending college with their twin sibling.

“I enjoy being a twin here on campus.  It helps you stand out.  People ask questions, so you really have to interact with people.  We are still two different individuals who have different interests,” said Chris.  Cam concurred, “If all else fails, I always have him and he always has me.  We are very independent, but we talk to each other about everything.  At the end of the day, we’ve got each other’s backs.”

On October 23, the Currin brothers will participate in Building Men of Worth’s Dress for Success day, designed to encourage their members to support the group’s motto and, “distinguish themselves from the pack.”

“We want to make sure we teach these guys that it is important to set yourself apart so when people look at you they see that you care about your appearance, you care about being here, and you care about your future. Right now we have 25-30 guys who have been involved consistently in the organization. At the end of the semester, I don’t want to look at that list and see that anybody has gone home,” said Cam.