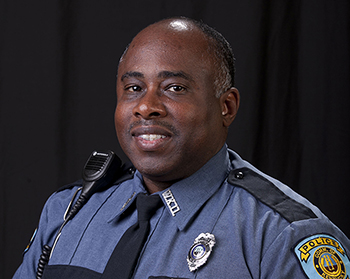 After a national search, Mitchell L. Walker has been named the new police chief at WKU.

Walker, who has been the interim chief since August 2016, will begin his new role immediately. He has more than 26 years of law enforcement experience, including five at WKU, 16 with the Bowling Green Police Department and six with the Burkesville, Kentucky, Police Department.

“The search committee reviewed 46 applicants,” said Brian Kuster, Vice President for Student Affairs at WKU. “Mitch demonstrated excellent leadership skills and an understanding that the WKU Police needs to have a community oriented policing philosophy as its core mission. He will be an authentic leader for our police department.”

Walker said he was excited about this new stage in his law enforcement career.

“I thank God for giving me the opportunity to serve as Chief of Police at WKU. I want to thank my wife Tonya, daughter Olivia and son Shawn for their support,” he said. “I also want to thank Vice President Kuster for his leadership and selecting me from this process and the employees at WKUPD for their support and hard work.”

Walker said he will be organizing a WKU Chief's Advisory Team that will consist of students, faculty and staff.

“Implementing more community oriented policing programs across campus and working with other agencies of the criminal justice system will be a priority,” he said.

Walker earned a bachelor’s degree from WKU. He also trained in Academy of Police Supervision and in situational leadership and is a training instructor for the Department of Criminal Justice.