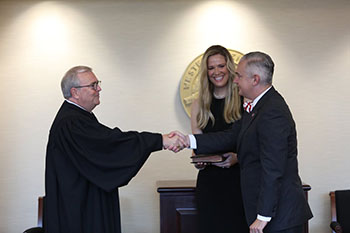 With his wife Kacy holding a Bible belonging to WKU’s first president, Dr. Henry Hardin Cherry, Timothy C. Caboni took the oath of office as WKU’s 10th president during the Board of Regents’ quarterly meeting on July 28.

“Very few occasions are this special,” President Caboni said after Chief Justice John D. Minton of the Kentucky Supreme Court administered the oath. “I look forward to continuing the remarkable trajectory WKU is on as we go forward and working with all of our stakeholders.”

Justice Minton also presided over the installation of the Board’s officers: Dr. Phillip Bale of Glasgow, chair; Gillard B. Johnson III of Nicholasville, vice chair, and Frederick A. Higdon of Lebanon, secretary.

*Approved Distinguished Professor appointment for Albert Meier, a professor in the Department of Biology.