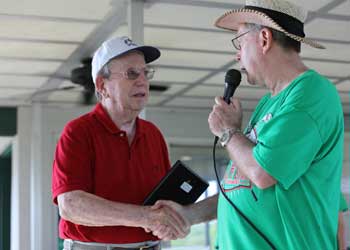 A special milestone was celebrated Friday morning as Dr. Raymond Cravens, retired WKU administrator and faculty member, was recognized for playing in the annual Faculty-Staff Golf Tournament for 60 consecutive years.

Steve Rey, director of Intramural-Recreational Sports, presented Dr. Cravens with a plaque before the start of the 60th annual tournament at Cross Winds Golf Course in Bowling Green.

“For someone to play in every tournament is special,” Rey said.

Dr. Cravens, a WKU graduate (A.B. degree, 1952; master’s, 1955) who joined the faculty in 1958 as an associate professor of political science, has seen the golf tournament and the university change in the past 60 years.

“I’ve enjoyed good health,” said Dr. Cravens, who also served as professor of government, Dean of the College, Dean of the Faculty, Vice President for Academic Affairs, Dean of Public Service and International Programs during his career at WKU. “I thought I would play again this year to keep up the record.”

He recalled that the tournament began when Coach Frank Griffin, the first director of intramurals at WKU, invited “a small cadre of people” for a round of golf at Indian Hills Country Club followed by a cookout at his farm off Morgantown Road.

Dr. Cravens was paired with WKU football coach Nick Denes in that first tournament, a two-person scramble. Somehow, they ended up winning. “Coach Denes was a very colorful fellow,” he said. “He would tell a different joke on every hole and kept everyone entertained.”

Participation in the tournament grew the next year and continued to grow as WKU’s enrollment and the number of faculty and staff increased in the 1960s.

“What began with a small group of faculty-staff has grown into the longest-standing program hosted by Intramural-Recreational Sports at WKU,” Rey said.

Proceeds from the Faculty-Staff Golf Tournament support the student development fund in Intramural-Recreational Sports. Since 2007, the tournament has raised nearly $80,000 to provide scholarships and to help IMREC students attend conferences, participate in workshops and complete certification programs.

“We’ve taken our golf tournament and turned it into a great fundraiser for students on our campus,” Rey said.