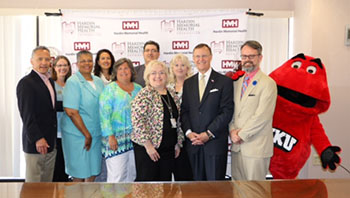 Photo caption: Representatives from Hardin Memorial Health and WKU celebrate the new partnership that will allow HMH licensed practical nurses (LPNs) to work toward obtaining their registered nursing degree at no cost to them while continuing to work full-time.

HMH and WKU leaders, joined by HMH nursing staff, signed a Memorandum of Agreement during a ceremony May 31 at Hardin Memorial Hospital in Elizabethtown.

“Many LPNs working at HMH aspire to be RNs, but financial circumstances hold them back,” said HMH Vice President and Chief Nursing Officer Sharon Wright. “Through this WKU partnership, our LPNs will be able to become RNs, advancing their knowledge, skills and careers. That’s a win for our employees, their families, our healthcare system and the communities we serve.”

Greg Peel, an HMH Emergency Department LPN, called the program a gift-wrapped opportunity. College costs kept him from achieving his longtime career goal of becoming an RN, the 56-year-old said. Because of the new program, he is looking forward to starting classes later this year.

“This program addresses every obstacle that prevented me from seeing my way through to my dream of becoming a registered nurse,” Peel said. “HMH will cover the tuition, and online classes allow me to work full time while pursuing a degree.”

HMH’s commitment to cover tuition illustrates its dedication to employees, said HMH LPN Amanda Eldridge, who is pursuing an Associate of Science in Nursing (ASN) at WKU. She wants to advance her career at HMH, she said.

“I want to provide more to our patients and to work in all areas of HMH, and becoming an RN will allow me to do just that,” she said.

“We are very excited to partner with HMH to create this new ASN pathway,” said Dr. Mary Bennett, Director of the WKU School of Nursing. “It is critical that educational institutions and employers work together to develop programs that not only meet the needs of working healthcare professionals, but also position our healthcare systems and communities to meet the growing demand for registered nurses.”

“It always make sense to invest in employees,” Covault said. “If a member of the HMH team wants to advance his or her nursing career, we support that. In turn, initiatives like the LPN to ASN Program help HMH recruit and retain the brightest nursing talent. That means the best for HMH patients.”About HMH: Hardin Memorial Health (HMH) is an integrated system of healthcare providers throughout a 10-county region of Central Kentucky. HMH is committed to delivering the highest-quality patient-centered healthcare to the more than 400,000 people it serves. With more than 2,100 medical professionals including 300 first-in-class physicians in over 45 specialties as well as primary care and a 300-bed hospital, HMH provides comprehensive healthcare close to home for the residents of Hardin, Meade, Nelson, LaRue, Breckinridge, Grayson, Hart, Bullitt, Green and Taylor counties.  HMH is a county-owned system under a management contract with Kentucky’s Baptist Health, headquartered in Louisville, Kentucky.