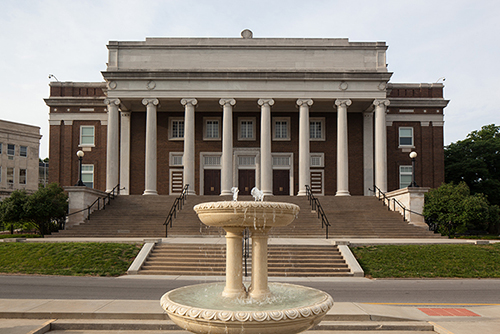 SCHEDULE UPDATE: Due to unforeseen circumstances the Roxane Gay event scheduled for Sept. 19 has been cancelled. The CES committee will work to reschedule this event for a later date.

The 2017-2018 Cultural Enhancement Series Committee has announced its season lineup for the academic year beginning this fall.

The first event of the season features Roxane Gay on Sept. 19. Gay’s writing appears in Best American Mystery Stories 2014, Best American Short Stories 2012, Best Sex Writing 2012, A Public Space, McSweeney’s, Tin House, Oxford American, American Short Fiction, Virginia Quarterly Review and many others. She is a contributing opinion writer for The New York Times. She is the author of the books Ayiti, An Untamed State, the New York Times bestselling Bad Feminist, and Difficult Women and Hunger forthcoming in 2017. She is also the author of World of Wakanda for Marvel.

On Oct. 18, former Secretary of Labor Robert B. Reich will take Van Meter Hall’s stage. Reich is one of the world’s leading thinkers about work and the economy. Now Chancellor’s professor of Public Policy at the University of California at Berkeley, he has served under three national administrations, most recently as Secretary of Labor under Bill Clinton. He also served on President Barack Obama’s economic transition advisory board. In 2008, TIME magazine named him one of the 10 most successful cabinet secretaries of the past century. Reich is the author of 15 books including The Work of Nations, which has been translated into 22 languages, and several other national best sellers. He has a reputation for seeing where politics and the economy are going before they get there.

In the spring 2018 semester, Yamato: the drummers of Japan will perform on Feb. 2. Yamato was founded by Masa Ogawa in 1993 in Nara, ‘the land of Yamato” which is said to be the birthplace of Japanese culture. Based in Asuka Village, Nara Prefecture, Yamato travels all over the word with Japan’s traditional Wadaiko drums, putting its very souls into the unusual instruments, whose sound stirs the hearts of people everywhere.

On Feb. 13, Paul Alan Cox of Brain Chemistry Labs will lecture on ethnobotany and the search for new ALS and Alzheimer’s drugs in remote villages. A native of Utah and Wyoming, Cox graduated in Botany and Philosophy from Brigham Young University. As a Fulbright Fellow, he read for his M.Sc. in Ecology at the University of Wales. He later received his A.M. and Ph.D. in Biology from Harvard University where he was a Danforth Fellow and a National Science Foundation Fellow. In 1997, TIME magazine named Cox one of 11 “Heroes of Medicine” for his work in ethnobotanical drug discovery. In the same year, he was awarded the Goldman Environmental Prize for his efforts in preserving Samoan rain forests and later shared the Rachel Carson Award with Senator Tom Harkin. He was elected President for the Society of Economic Botany and President of the International Society for Ethnopharmacology.

Finally, on March 5, author, musician and neuroscientist Daniel J. Levitin will present Your Brain on Music. He is the author of three consecutive No. 1 best-selling books: This Is Your Brain on Music, The World in Six Songs and The Organized Mind. He is Founding Dean of Arts & Humanities at the Minerva Schools at KGI in San Francisco. He is also a Distinguished Faculty Fellow at the Haas School of Business at UC Berkeley, and James McGill Professor Emeritus of Neuroscience and Music at McGill University.

All of the Cultural Enhancement Series events will take place at 7:30 p.m. CT in WKU’s Van Meter Hall. Admission is free to the campus and public. No tickets are required for these events, but seating will be offered on a first-come, first-serve basis.