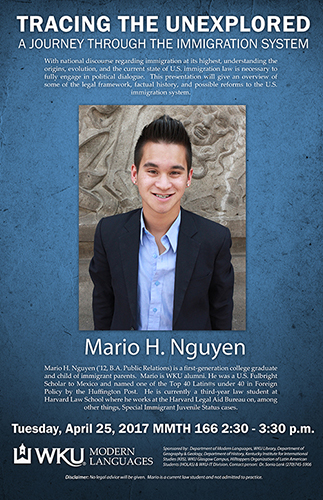 Mario H. Nguyen, a 2012 WKU graduate, will return to campus on April 25 to give a talk on the origins, evolution and current state of U.S. immigration law as part of the 11th annual Tracing the Unexplored Series.

Nguyen’s talk, Tracing the Unexplored: A Journey Through the Immigration System, will be held from 2:30 p.m. to 3:30 p.m. at Mass Media Technology Hall Auditiorium. Admission is free and open to the public.

Nguyen is a first-generation college graduate and the child of immigrant parents. He graduated from WKU with a bachelor’s degree in Public Relations. During his time at WKU, he earned much recognition with the Forensics Team, was a U.S. Fulbright Scholar to Mexico and was named one of the Top 40 Latinos under 40 in Foreign Policy by the Huffington Post. He is a third-year law student at Harvard Law School where he works at the Harvard Legal Aid Bureau on, among other things, Special Immigrant Juvenile Status cases. Nguyen won the 2015 NYU School of Law Immigration Moot Court Competition and was named Best Oralist.

“It is such a privilege to have Mario Nguyen, a well accomplished WKU alumnus, speak about the immigration system.  His account is informed by his experience -- as the son of immigrants and his work with juvenile cases -- as well as his law training at Harvard." Dr. Sonia Lenk said.