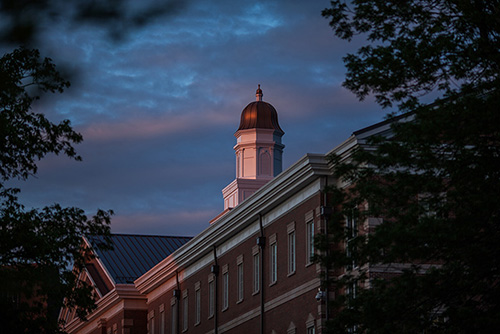 Nine WKU students have been recognized by the U.S. Department of State Critical Language Scholarship Program. All are students in the Dixie and Pete Mahurin Honors College at WKU.

Four students will receive full funding to participate in eight-week summer intensive language programs abroad while five others were named alternates. (More: Photos of the students.)

The CLS recipients are Andi Dahmer of Fisherville; Olivia James of Eagle, Colorado; Logan Johnson of Russellville; and Kathryn Williams of Louisville.

Those designated alternates are Brian Anderson of Buffalo; Austin Barnes of Hodgenville; Ashleigh Cleary of Hebron; Kate Hart of Princeton; and Nathan Read of Belleville, Illinois. All alternates are students in the Chinese Flagship Program at WKU.

Dahmer, a second-year Economics, Spanish, International Affairs and Asian Religions & Cultures major, is the daughter of Ann Coffey and Steve Dahmer. She is a student in the Chinese Flagship Program and will study Mandarin in Dalian, China.

In addition to leading Americans for Informed Democracy, serving as the Senator for Gordon Ford College of Business in the Student Government Association, and participating in HOLAS, the Hilltoppers Organization of Latin American Students, Dahmer holds leadership positions in WKU’s chapter of College Youth in Government and Omega Phi Alpha Service Sorority. She is pursuing research and professional goals related to understanding and shaping economic links between Latin America, China and the United States.

James, a second-year International Affairs and Asian Religions & Cultures major, is the daughter of Matt and Kandi James. She is a student in the Chinese Flagship Program and will study Mandarin in Suzhou, China.

Outside of the classroom, James participates in Chinese Language Table and is active in Reformed University Fellowship and Fencing Club. Her experience with Teen Court in high school stoked her interest in research, analysis and working behind the scenes to create change. She plans to use her linguistic and cultural proficiency to pursue a career as an analyst safeguarding American national security.

Johnson, a third-year International Affairs major, is the son of Rob and Julie Johnson. He is a student in the Chinese Flagship Program and will study Mandarin in Xi’an, China.

Johnson is active in WKU campus ministry and community service. The choice to work in community development has come naturally to him, as he spent the first five years of his life in Taiwan, Singapore and Hong Kong. He has participated in service programs in the U.S., Haiti, Taiwan and China, and plans to pursue a career with the United States Agency for International Development (USAID).

Williams, a first-year Arabic major, is the daughter of Joanna and Christopher Williams. She will study Arabic in Amman, Jordan. The advocacy director of No Lost Generation at WKU, a club focused on helping refugee children, and an active member of Model Arab League, she will be building on her experience studying Arabic in Morocco with a Department of State-funded National Security Language Initiative for Youth (NSLI-Y) summer program. Having grown up working on her family farm in eastern Kentucky, Williams plans to pursue a career improving water security and agricultural sustainability in the Middle East.

“In her first year in college, Kathryn has already established herself as one of the most promising students in the Arabic program through her academic excellence and leadership,” said Dr. David DiMeo, Assistant Professor of Arabic. “The CLS is one step in a very bright future.”

Anderson is a second-year Economics, International Affairs, and Asian Religions and Cultures major. He is the son of Kim and Heath Anderson.

Barnes is a second-year Mechanical Engineering major. The son of Rebecca Wofford, he is a member of WKU Army ROTC.

Cleary is a second-year International Affairs and Spanish major. She is the daughter of Tom and Mary Cleary.

Hart is a third-year International Affairs, Spanish and Asian Religions and Cultures major. She is the daughter of Fred and Sally Hart.

Read is a fourth-year Economics, International Affairs and Asian Religions and Cultures major. He is the son of David and Denise Read.

“I am so proud of our Chinese Flagship scholars,” said Dr. Ching-Hsuan Wu, Academic Director of the Chinese Flagship program. “Achieving a high level of Chinese proficiency takes grit and perseverance. I am very proud to say our 2017 Critical Language Scholarship winners and alternates have these qualities, and their determination and enthusiasm will continue to help them overcome new challenges and lead them to more successes.”

The Critical Language Scholarship Program is part of a U.S. government effort to dramatically expand the number of Americans studying and mastering critical foreign languages. Students of diverse disciplines and majors at undergraduate and graduate levels are encouraged to apply. Participants are expected to continue their language study beyond the scholarship period, and later apply their critical language skills in their future professional careers.