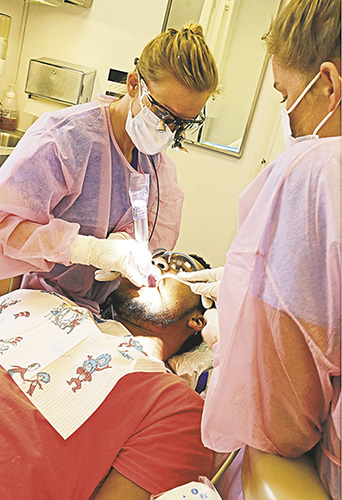 GLASGOW – A new partnership between the Barren County Detention Center and Western Kentucky University has kicked off with half a dozen or so inmates getting preventive care from dental hygiene students.

“It’s a series of checks,” said Daniel Carter, a dentist who serves as the dental director for the WKU Institute for Rural Health, as he stood outside the institute’s mobile dental clinic that was parked at the jail Monday morning. “The patient will come on. The dentist or the hygienist will check their health history just for any kind of big problems. If that’s OK, then we kind of give the students a thumbs up, and then they start their exams. So then they do an examination, an evaluation, and then they get what we call a start check. We come over and kind of double-check what they’ve found in their exam, and if everything’s all right then, they go ahead and get started. They do the whole cleaning, get the patient completely done. Then we’re going to do a final check to make sure they got the teeth completely clean, and if the patient’s going to get fluoride, they do that afterward.”

Carter and Bonny Petty, the supervising dental hygienist with the institute, are the ones overseeing the students’ work. Only second-year students can get this particular hands-on experience, Carter said, and there were three in the clinic Monday.

The WKU Institute for Rural Health has outreach programs for students in programs such as nursing and dental hygiene through which the students provide services in communities, but this is the first jail the mobile unit has visited, Petty said.

Mostly, the mobile clinic, which has two patient rooms on either side of an intake/waiting room, goes to Head Start facilities and elementary schools, Petty said.

“But our dean of our college [of Health and Human Services], Neale Chumbler, reached out to our [institute] director [Matt Hunt] and said, ‘Hey, I’ve got this idea. How about going to the detention center in Barren County?’”

And the idea took root from there, but the seed idea had germinated through another WKU-Barren County Detention Center partnership.

He explained that another WKU faculty member, Krisstal Clayton, an assistant professor in the psychology department, had done some programs at the jail, and she got in touch with Chumbler.

Jailer Matt Mutter said Clayton has been bringing students to the jail for a few years now for tours and some inmates have gone to her classes to speak.

“Dr. Clayton really is interested in inmate care,” Mutter said, and she knew someone with the dental hygiene program and got the ball rolling toward this idea. “We’re just kind of starting slow and we’ll how it progresses. We’re only doing six today, and then they’re coming back again in March and [we’ll] try to keep building on it.”

Mutter is retiring at the end of this month, with nearly two years left on his latest four-year term. Barren County Judge-Executive Micheal Hale has announced that he is appointing Tracy Bellamy, Mutter’s chief deputy jailer, to the interim jailer position through the end of next year’s election; Bellamy has already said he plans to run for the seat.

“When Matt approached me about the program, I was excited to hear about it,” Bellamy said. “We talked to WKU about it, and there was no doubt that we were going to do it. We’ve worked with them on our Project Breaking Ground, our garden program. It’s been very successful, and we’re getting ready to start it again here before spring.”

It was actually a year ago this month that the project’s groundbreaking got under way, with snow still spotting the side yard that would eventually produce numerous vegetables, herbs and more.

“Our working relationship with Western has been awesome. It’s been fantastic and we’re going to continue to work with them and keep the programs going,” Bellamy said.

Carter said he could envision adding other jails further into the future, either with students or just Petty and him providing the services. They only get the students with them a certain number of days out of the academic year, though, and with also going to the schools, their schedule is pretty full.

The clinic will be at the Barren County jail twice this semester, Carter said.

The cost of the mobile unit is mostly through a combination of corporate sponsorship, grant money and university funding. For the preventive dental services themselves, Carter said Medicaid is billed for the patients who have that coverage; otherwise, a “nominal fee” of $10 is charged if the patients have it.

In this case, that fee for non-Medicaid patients is covered through the jail’s medical budget, approximately $25,000 to $30,000 of which comes through inmate commissary purchases, Bellamy said.

One of the first inmates getting his teeth cleaned Monday morning was Michael Bradley.

“They did a pretty good job on my teeth. I’ve never been to the dentist before. It’s a pretty good program,” the 25-year-old said.

He added that he had had an appointment scheduled with a dentist that he never made it to because of the legal trouble that led him to be in jail.

Mutter said that for this first-time visit, the opportunity for the basic dental care was provided to inmates who were already classified to be able to go outside the jail for work programs.