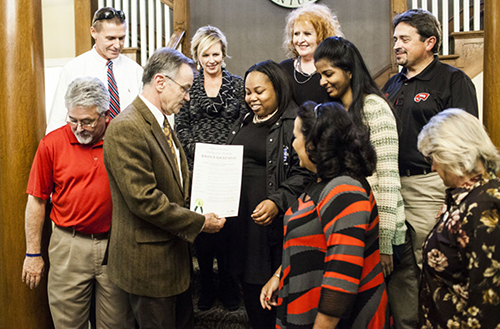 As many as 2 million people develop infections from antibiotic resistant bacteria each year, a problem the Centers for Disease Control and Prevention says kills at least 23,000 people as a direct result of those infections.

The issue is compounded in Kentucky, a state that surpasses all others for the number of antibiotics prescribed in outpatient settings.

"It’s a huge public health threat, and it's not necessarily on the general public’s radar screen yet," said public health Professor Marilyn Gardner, who teaches at Western Kentucky University.

Efforts from a group of WKU students to raise awareness about the issue paid off Tuesday, when Bowling Green Mayor Bruce Wilkerson read from a proclamation naming Nov. 14-20 "Antibiotic Resistance Awareness Week in Bowling Green."

Andrea Flinchum, who works to combat antibiotic resistance with the Kentucky Department of Health, said the problem stems from both doctors who overprescribe antibiotics and high demand from patients, who may not need them if they have viruses.

"If we continue to overuse and abuse antibiotics then they’re not going to work anymore," she said. "There aren’t any new antibiotics in the pipeline right now, and so we have to preserve what we have."

Inconsistent usage of antibiotics by patients allows bacteria to get limited exposure to antibiotics and then adapt to become resistant to them. That's why it's important to follow instructions when using them and not save them for later.

Infectious diseases used to be the number one killer of humans, Flinchum said, but that changed with the inception of antibiotics. She worries that public health could backslide into a world where antibiotics are less effective than they should be.

While the awareness campaign is just starting in Kentucky, Flinchum said she's encouraged by steps other states are taking to avoid building up resistance in populations. Those strategies include delayed prescriptions where doctors tell patients to fill antibiotic prescriptions only after a few days when bacterial infections can be distinguished from viruses, which don't respond to antibiotics.

Jim Williams, a master's student in WKU's public health program, is one of four students trying to raise awareness. Williams and his classmates have provided information to local day care centers in an effort to reach children by educating their parents. His group is also talking to other WKU students and asking them to spread the word on social media.

Williams is an adult learner and the EMS field operations manager at The Medical Center. He appreciated learning from the experiences of international students in the program, using social media to spread health education and the committed instructors.

"They don’t get a lot of accolades, but it’s an important job that they do," he said.

When it comes to antibiotic use, Williams encourages people to use them carefully.

"It’s not just a decision that may be affecting you," he said. "It may come back and affect you worse, but it also may be something you spread to family or the entire community."