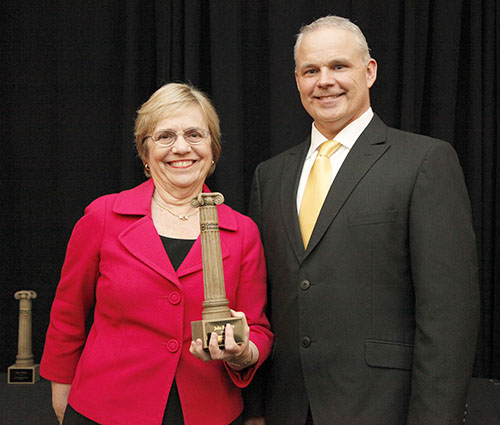 Julia Link Roberts was recognized for her contributions to the field of gifted education with an award given by her alma mater, the University of Missouri, March 13 in Columbia, Mo.

The Honorary Alumni award given annually by the MU College of Education was presented to Roberts for her work as director of The Center for Gifted Studies and executive director of The Carol Martin Gatton Academy of Mathematics and Science in Kentucky.

Originally from Kirksville, Mo., Roberts received a bachelor’s degree in history from the University of Missouri before turning her focus to education and earning doctoral and master’s degrees in education and social sciences from Oklahoma State University.

“I have had the opportunity and privilege to be with Dr. Roberts in numerous professional settings and her knowledge of the discipline and the impact of her work are significant,” he wrote. “It is gratifying and rewarding to hear the comments from students and their parents about the direct impact that Dr. Roberts has had on their lives.”

“Her advocacy work for gifted education and educational reform is legendary,” she wrote of Roberts. “Across Kentucky, Dr. Roberts is known for her positive relationships which have generated a ripple effect stemming from her service on the gubernatorial-appointed Kentucky Advisory Council for Gifted and Talented Education, to the local delivery of quality programming for talented learners.”

For over 30 years, Roberts has been an active advocate for gifted children at the state, national and international levels. She serves on the boards of the Kentucky Association for Gifted Education and The Association for the Gifted (a division of the Council for Exceptional Children), and she is one of seven elected members of the World Council for Gifted and Talented Children’s Executive Committee. For her advocacy work, Roberts received the very first David W. Belin Advocacy Award from the National Association for Gifted Children in 2001. She was also described as one of the 55 most influential people in the field of gifted education in the 2004 publication “Profiles of Influence in Gifted Education.”

In the last 10 years, Roberts has written eight books on gifted education and contributed chapters to 12 more. Most recently she co-authored “Teacher’s Survival Guide: Differentiating Instruction in the Elementary Classroom.”

The Center for Gifted Studies at WKU (wku.edu/gifted) serves gifted children, their educators and parents through educational opportunities, professional development and a variety of other resources and support.