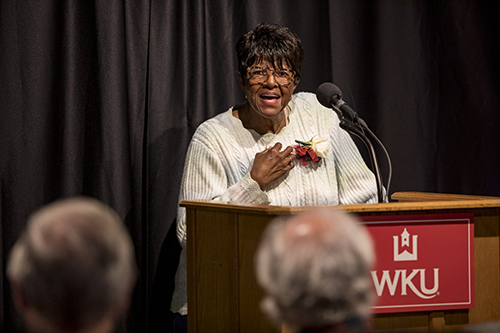 Ray, who earned a master’s degree in Folk Studies, received the Folk Heritage Award for her work to document and share the stories of Jonesville and other Black communities in Bowling Green.

“I’m honored and humbled to know that my work is recognized by my community as well as those outside of my community,” she told the Kentucky Arts Council.

Each year, the Kentucky Arts Council coordinates the presentation of the awards, which recognize individuals and organizations who have made extraordinary and significant contributions to the arts in Kentucky. The awards were presented Jan. 10 in Frankfort.

“Maxine Ray is a dedicated folklorist whose passionate life-long research focus has centered on Bowling Green’s African American community and been an inspiration to many,” said nominator Brent Bjorkman, Director of the Kentucky Folklife Program and Kentucky Museum. “Our university and region continues to benefit from Maxine’s ongoing insightful documentation work which has been instrumental in both driving the current Jonesville exhibit that uplifts the voices the community’s past residents and their descendants and sharing her ongoing research work and process with a growing body of community scholars who are enlivened to further gather these stories.”