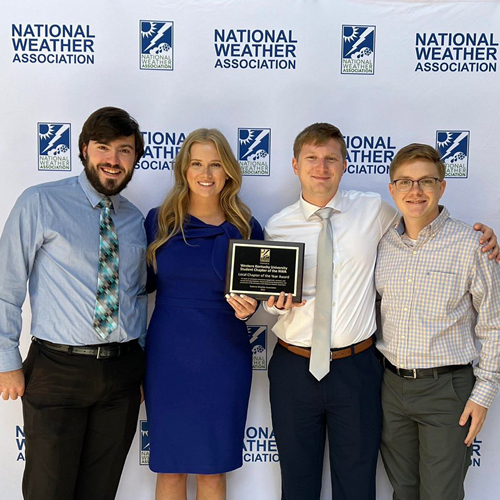 WKU’s Disaster Science Operations Center (DSOC) received the “Mitigation Project of the Year” award from the Kentucky Association of Mitigation Managers at the group’s annual meeting last month in Erlanger.

“We are so proud of the work of our meteorology and disaster science students. They exemplify what it means to be a Hilltopper and make the most of their applied learning experiences. They use their expertise to give back to their community and support one another in their academic pursuits. External recognition like this brings further credibility to our programs and validates the great things that we are doing,” Chair for the Department of Earth, Environmental, and Atmospheric Sciences, Leslie North said.

Homeland Security Sciences graduate student John Bowen accepted the award and made a presentation on the applied research and experiential learning opportunities offered at WKU. Bowen, who received his bachelor’s degree in Meteorology from WKU, serves as the first graduate coordinator of the DSOC.

A ribbon cutting for WKU’s DSOC is scheduled for Nov. 4 at the Environmental Sciences and Technology Building.

In other awards, WKU Meteorology student chapters of the National Weather Association and the American Meteorological Society have been recognized for their innovative community engagement, outreach, service-learning initiatives, networking and professional development.

The National Weather Association presented its "Local Chapter of the Year Award" to WKU’s NWA Student Chapter in August during the NWA’s 47th Annual Meeting in Pittsburgh.

The American Meteorological Society will present WKU with its Student Chapter Honor Roll Award in January at the AMS national meeting in Denver.

The student meteorology chapters are heavily involved with White Squirrel Weather and the Disaster Science Operations Center and played a key role in the December 2021 tornado forecasts and response efforts. Dr. Durkee serves as faculty advisor to both chapters.