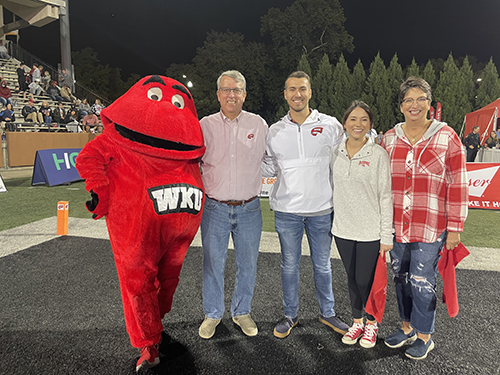 Gray, who is majoring in Finance, was joined by his parents, David and Robin Gray, and sister, Bailey Mattingly, on the field Saturday night at Houchens Industries-L.T. Smith Stadium.

In his essay, Gray said, “WKU has really been life-changing for the Gray family.”

Gray continued: “My parents are high school sweethearts from Barren County who were first generation WKU graduates.  When I’m asked, ‘Why WKU?,’ I say, like in the movie, The Blindside, it is where my family goes.  We agree that WKU takes a personal interest in seeing students succeed.”

Gray, a member of Sigma Phi Epsilon, will join his family members as a WKU graduate next May.

A selection committee of alumni and staff reviewed nearly 200 nominations for this year’s Family of the Year. The Gray family received a prize package including tickets to all weekend events and an $800 student scholarship for the 2023 spring semester.

Congratulations to the English Department’s very own, Dr. David Bell, whose novel She’s Gone has been listed as a New York Times Bestseller!