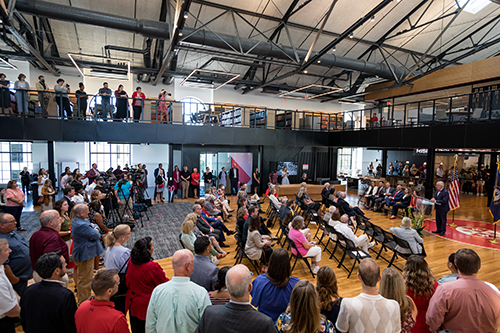 After first serving as a physical activities building, then for decades as a university library, an iconic Western Kentucky University structure was dedicated today (Aug. 31) as The Commons at Helm Library. First announced during WKU President Timothy C. Caboni’s investiture address in April 2018, The Commons enables the university to move away from utilizing its library as only a place to house books and periodicals and instead provides a space where students, faculty, and staff can gather at the top of The Hill to share a meal, continue instruction beyond classroom walls, and develop ideas for collaboration. The Commons is a partnership between WKU Libraries and Aramark, WKU’s food service provider.

The building has a storied history on WKU’s campus, dating back to 1931 when it served as the Health and Physical Education Building. It hosted concerts, dances, and course registration in addition to serving as the home of WKU’s basketball team for over three decades. When the basketball program moved to E.A. Diddle Arena in 1963, the structure was transformed into the Helm Library, and it served in this capacity until 2019. Much of the building’s history is preserved in The Commons. For example, the original basketball jump circle is exposed in the middle of the main floor, and the building’s original skylights were added back after being covered up for decades.

President Caboni acknowledged the building’s history before cutting the ribbon on The Commons. “The innovative design of The Commons presents us with a modern venue that offers the technology our campus community needs to be successful while also preserving the history of a building that has meant so much to many of our faculty, staff, and students since 1931,” he said.

Dean of WKU Libraries Susann deVries noted that The Commons will play an important role on WKU’s campus. “Serving as an intellectual hub to all on campus, this gathering space will feed both the body and the brain,” she stated. “I am thrilled by the student response to this environment and I look forward to the future.”

Initially, WKU made steady progress toward completing The Commons. After originally sharing his vision for the space in 2018, President Caboni formed a steering committee of faculty, staff, and students to gather feedback from stakeholders and to oversee the initiative. WKU Planning, Design and Construction partnered with Gensler design firm out of Chicago and Louisville-based architects Luckett and Farley to develop plans for the space. Helm Library closed at the conclusion of the spring 2019 semester, and demolition work began immediately. The goal was to open The Commons at the beginning of the fall 2021 semester.

However, progress ground to a halt in the spring of 2020 as a pandemic gripped the planet. During that time, work slowed dramatically as global lockdowns went into effect. When lockdowns were lifted and work could resume, unprecedented materials shortages as well as workforce and supply chain challenges caused continuous construction disruptions, and the initial opening target soon became beyond reach.

President Caboni noted that, while challenging, the slow progress provided additional opportunities for building enhancements. “While the delay caused frustrations, it also afforded us the opportunity to pour even greater creativity and ingenuity into The Commons,” he said. “And if I do say so myself, that time was well spent, and this space was worth the wait.”

In April 2022, The Commons opened its doors to the campus community and was met with campuswide acclaim. Student Body President and Student Regent Cole Bornefeld said that The Commons has enhanced his student experience. “This space makes me even prouder to be a Hilltopper and I am ever more thankful as a student to be able to attend WKU,” he noted. “As the voice of the student body, I will say job well done to Western Kentucky University, Aramark, and everyone that played a role in making The Commons at Helm Library a reality.”

President Caboni shared his experience of being in The Commons on opening day in the spring. “I talked to students, to faculty, and to staff to gauge their reactions,” he noted. “Students used words like ‘amazing,’ ‘unbelievable,’ ‘stunning,’ and perhaps my favorite, ‘magical’ to describe their reaction to seeing and immersing themselves into The Commons for the first time.”

The Commons will play a key role in transforming the north end of WKU’s campus. In 2021, the Garrett Conference Center was removed, and recently, President Caboni announced a proposed renovation of Cherry Hall that will be completed over the next several years. The Commons, the William “Gander” Terry Colonnade at Ivan Wilson Fine Arts Center, Cherry Hall, Gordon Wilson Hall, and Van Meter Hall will surround the green space formerly occupied by the Garrett Conference Center to create a more traditional academical village at the top of The Hill.

President Caboni concluded his remarks by reminding those in attendance of the role The Commons will play in strengthening the campus community and advancing the institutional mission. “Let us never forget the importance of gathering together and providing relevant spaces that support our responsibility to nurture a passion for teaching and learning.”