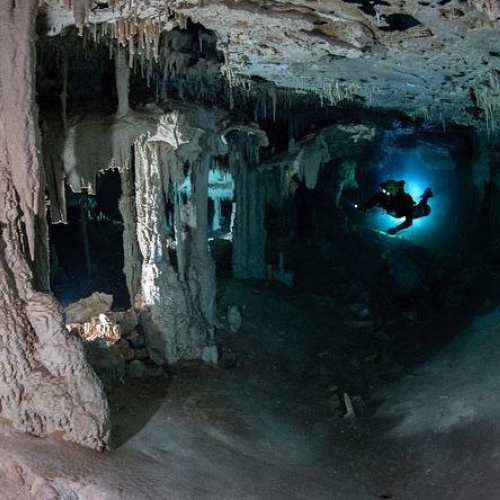 The exchange was specifically geared to strengthen US-Mexico partnerships through United Nations Educational, Scientific, and Cultural Organization’s (UNESCO) scientific programs with a focus on the world’s longest caves. While Kentucky’s Mammoth Cave is currently the longest known cave system in the world, the second and fourth longest known caves, Sac Actun and Ox Bel Ha respectively, are located in the Yucatán Peninsula, Mexico. Though drastically different in respect to geologic setting and major land use, these two areas share in highlighting the importance and vulnerability of groundwater resources, immense biodiversity, and the rich cultural history.

It is these similarities and differences that provided scholars from both UC and WKU the opportunity to learn from the exchange of professional knowledge during their visit to each other’s respective region.  Exchange activities in Mexico began with an international symposium hosted by our Mexican partners at UC (Quintana Roo) in Cancun and began with a welcome address from each organization involved as well as comments from U.S. Consul General Dorothy Ngutter and U.S. National Park Service World Heritage Specialist Jonathan Putnam. Presentations on karst hydrology, natural resource management, cave exploration, and landscape conservation were given by WKU team members as well as corresponding topic experts from Mexico.

The symposium concluded with a public event in light of the 2022 UIS International Year of Caves and Karst (IYCK).  Karst is landscape that is underlain by soluble bedrock that dissolves to form caves, sinkholes (cenotes in Mexico), underground rivers and springs; both Mammoth Cave and the Yucatán Peninsula represent two of the most extraordinary karst areas in the world. UIS President and National Cave and Karst Director, George Veni opened the event and commended everyone for participating in the IYCK and continuing to diligently work towards its theme and mission– Explore, Understand, Protect. The public event featured the screening of short documentaries about each cave system and included a lively discussion among participants. Ana Celis, Universidad del Caribe Professor, ended the symposium by stressing the need for everyone to better understand underground spaces. She stated “With karst ground water supporting upwards of 20% of the world’s population, caves and karst landscapes are vital to life on our planet.”

In addition to the symposium, the US team visited research sites, assisted with mapping karst features, met with various conservation organizations and began cooperative efforts in data sharing during their week-long visit. The research team was also honored to have an opportunity to update the US State Department in a meeting with US Consul General Ngutter in Merida and discuss tangible ways to progress US-Mexico partnerships and conservation efforts. WKU has long been involved in such efforts globally. The current cooperation started months before the team’s trip abroad when WKU’s Chris Groves met Ms. Celis during the annual karst training hosted by the International Research Center on Karst Under the Auspices of UNESCO in China. Through continued discussions and subsequent support provided by the US National Park Service Office of International Affairs, WKU Ogden College of Science and Engineering, and WKU’s Applied Research and Technology Program, Ms. Celis spent two-weeks in June 2022 in intensive field training at Mammoth Cave and attended a WKU Karst Field Studies course. The exchange was organized and conducted by WKU and their above-mentioned partners.

Vital to better understanding karst systems in both the US and Mexico lies the purpose of this scholar exchange which is to build collaborative networks for the conservation and study of both the cultural and natural heritage of caves. To address this more specifically for the Yucatán cave systems, Universidad Tecnológica de La Riviera Maya and Dive Rite Mexico convened the workshop Exploration and Documentation of the World’s Longest Caves. The workshop featured presentations on cave diving from various researchers and independent cave explorers. One major difference to Mammoth Cave and an added complexity to mapping and studying the cave systems of the Yucatán is that they are primarily underwater. The US team through many years’ experience in exploration and documentation of Mammoth Cave offered ways to best collaborate and congregate large data sets, though diving efforts and underwater passages at Mammoth Cave pale in comparison to the beauty and immensity of passages in Sac Actun.

Neither cave system nor the many explorers and scientists that study them, show signs of stopping anytime soon. In 2021, twelve kilometers were officially added to Mammoth Cave while monthly expeditions to parts unknown continue today. Similarly, the intricate maze of underwater passages of Sac Actun and Ox Bel Ha grow longer and closer to connecting with each new dive. The longest cave in the world may never be truly known, but they can be better understood and protected by the people that live and depend on the many resources they provide.

For more information or questions, contact Lee Anne Bledsoe at 270-745-9224 or check out the following links: www.dyetracing.com, www.bradd.org/index.php/mammoth-cave-biosphere-region,  iyck2021.org/.