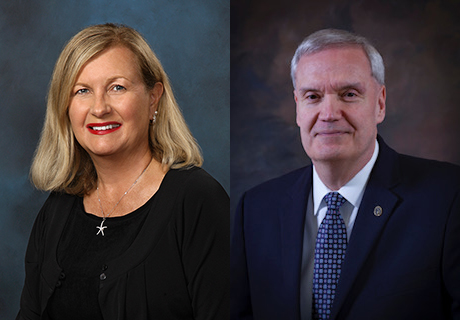 Dennison, a WKU alumna, replaces Jason L. McKinney of Alvaton. She is a pediatrician who practices in Glasgow. Dennison graduated from WKU in 1980 before attending medical school at the University of Louisville and completing her pediatric residency at the University of Texas Health Science Center at San Antonio. She has previously served on the WKU Alumni Association and the College Heights Foundation and has also been a prior member of the WKU Board of Regents.

“I’m thrilled to be given the opportunity to serve on the WKU Board of Regents,” Dennison said. “Higher education will face numerous challenges in the future, but I remain optimistic that the leadership at WKU is focused on what is best for our students. I look forward to the work ahead.”

Broady replaces Julie A. Hinson of Prospect. He is the Executive Director of the Bluegrass Community Bankers Association. He earned his undergraduate degree from WKU in 1977 and his graduate degree in 1984. He retired in 2020 as the CEO of Franklin Bank and Trust Company after 38 years of employment. Currently, he is the Chair of the Franklin Bank and Trust Company Board of Directors. He also serves on the Arts of Southern Kentucky Foundation, Inc. Board, the Medical Center at Franklin, Inc. Board, and is the Chair of the Franklin-Simpson Industrial Authority. He previously served as the President of the WKU Alumni Association Board, Chair of the Gordon Ford College of Business Executive Advisory Council, and on the Board of the Hilltopper Athletic Foundation.

“I have always had a strong affinity for WKU,” he said. “My wife and I are graduates and have been very involved in the university community. I am humbled and honored to be given the opportunity to serve WKU in this capacity.”

WKU President Timothy C. Caboni said he is excited that Regents Dennison and Broady are joining the Board of Regents. “Melissa and Gary have faithfully served their alma mater in different capacities through the years,” he said. “I know as Regents they will continue to advance our institution and create more opportunities for our students.”

The Board will next meet August 11 and 12 for its annual retreat and third quarterly meeting.