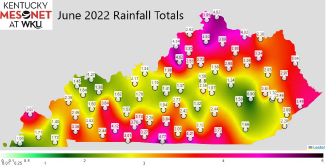 Kentucky’s statewide average rainfall for June is 4.72 inches, with only a few Kentucky Mesonet stations meeting that threshold. Aside from the deficit, the larger issue is the distribution of rain – both spatially and temporally. Many areas of southern and central Kentucky did not measure any precipitation following the June 6 event that drenched areas with over 3.5 inches of rain. Northern and eastern Kentucky experienced additional rounds of rain that has successfully kept the areas out of abnormally dry or moderate drought.

The combination of near record high temperatures and lack of rainfall created the perfect setup for a rapid intensification of drought. The timing of this in the growing season is resulting in potentially significant impacts in agriculture. The soil, air, and crops are all thirsty for any moisture available. There are some rain chances from scattered showers and thunderstorms over the holiday weekend, but it is not a guarantee that there will be widespread relief of the dry conditions.

As a service to the Commonwealth, the State Climate Office of Kentucky, a division of the Kentucky Climate Center at WKU, hosts a monthly webinar on drought and hydrologic conditions on the first Thursday of every month at 1 p.m. Central time (2 p.m. Eastern time) in conjunction with the Midwestern Drought Early Warning System. If you would like to participate in future webinars, send an email to kyclimate@wku.edu with the words Monthly Webinar in the subject line.

Interim Kentucky State Climatologist Megan Schargorodski will be leading the upcoming webinar on Thursday, July 7, with a thorough review of recent conditions and climate outlook. You can view the webinar on the Kentucky Climate Center YouTube channel at: https://www.youtube.com/channel/UCDg3h8leOZa0wHap90rX5Rw