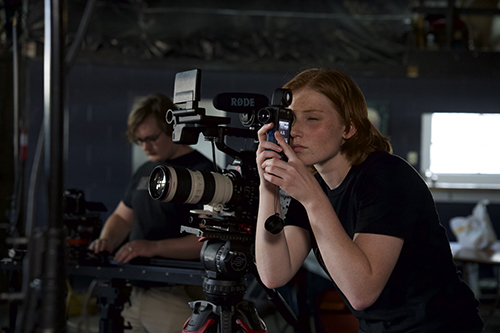 WKU PBS, Western Kentucky University’s Public Television Service, has been nominated for awards in three categories for the 58th Annual Ohio Valley Emmy Awards. The awards will be presented July 30 in Columbus, Ohio.

Cheryl Beckley, who recently retired from WKU PBS, is nominated twice for her work on The Nature of History documentary.

Purcell, Joshua Niedwick and Zeb Weese are nominated with Beckley for The Nature of History. They have all been previously nominated for their work.

“To me, everything comes down to surrounding yourself with the right team,” said Barati, producer/director for WKU PBS. “In particular, I cannot overstate the value that Julie Bowles brought to our productions. From initially running cameras and editing, to set design and lighting, working her way up into an assistant producer role, and eventually taking full lead and producing an episode, top to bottom, entirely on her own. She has been instrumental to the success of Lost River Sessions -- all while she was still a WKU student. I consider it the greatest honor to have worked alongside her, and her impact will be felt on this show and our station for years to come.”

Niedwick said: “It is humbling as well as a pleasure to work and collaborate with such amazing and talented colleagues and students. The added challenge of completing The Nature of History amongst the pandemic and resulting modified production guidelines was nothing short of harrowing, and the fact that we not only completed the project during that time but to also have it recognized by the academy, speaks to our ability to work together, and achieve our goals. It is an absolute honor to have my name listed alongside these exceptional professionals whom I consider to be dear friends.”

Barati was pleased to see the group recognized for their work.

“Cheryl, Josh, Neil and Jeff have been pillars of our station for years and I am beyond thrilled to see their work acknowledged on the highest level,” he said. “Their dedication to their craft as well as their commitment to their community is second to none. They lead by example and are always the last to look for credit, so I’ll do it for them.”

WKU PBS has been nominated in each of the past 20 years, receiving 30 awards.