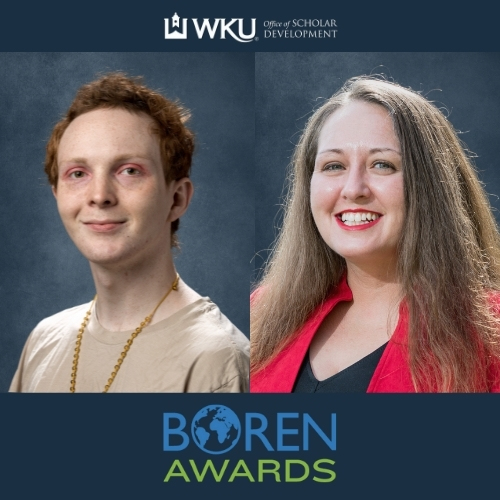 Miriam Dawson and Autumn Eichhorn, students in the Chinese Flagship Program at WKU, have been awarded $25,000 David L. Boren Scholarships to fund intensive language study in the United States and abroad during the 2022-2023 academic year. Heather Keen has been named an alternate in the competition.

The Boren Scholarship will fund the recipients’ Capstone Years, the culminating experience of WKU’s intensive Chinese Flagship Program (CFP). The CFP is intended to advance students to a level of fluency required to operate in a professional environment--often from zero experience at the beginning of their undergraduate career.

Miriam Dawson is a fourth-year student majoring in Chinese and Anthropology. She plans to study at the Defense Language Institute Foreign Language Center in Monterey, California. Following graduation, she will pursue a career in the U.S. Department of State as a Foreign Service Specialist.

Autumn Eichhorn is a fourth-year student majoring in Chinese and Asian Religions & Cultures. She plans to study at National Yang Ming Chiao Tung University in Taiwan. Following graduation, she will pursue a career in the U.S. Department of State as a Foreign Service Officer.

Heather Keen of Rineyville is the mother of fellow Hilltopper Steven Keen and plans to graduate from the Organizational Leadership JUMP program in Spring 2023 with an additional undergraduate degree in Arabic. She applied for a Boren Scholarship to fund an academic year of study at the University of Haifa in Israel. A recent recipient of a U.S. Department of State Critical Language Scholarship, she will spend the summer in intensive language study in Morocco before continuing to work toward a career in the U.S. Department of State.

The David L. Boren Scholarships and Fellowships are sponsored by the National Security Education Program (NSEP), a federal initiative designed to build a broader and more qualified pool of U.S. citizens with foreign language and international skills. Boren Awards provide U.S. undergraduate and graduate students with resources and encouragement to acquire language skills and experience in countries critical to the future security and stability of the United States. In exchange for funding, BOren award recipients agree to work in the federal government for a period of at least one year. “The National Security Education Program,” according to Dr. Michael A. Nugent, Director of the Defense Language and National Security Education Office (DLNSEO), “is helping change the U.S. higher education system and the way Americans approach the study of foreign languages and cultures.”

Since 1994, over 7000 American students have received Boren Awards and contributed their vital skills to careers in support of the critical missions of agencies throughout the federal government. “To continue to play a leadership role in the world, it is vital that America’s future leaders have a deep understanding of the rest of the world,” says former U.S. Senator David Boren, the principal author of the legislation that created the National Security Education Program.