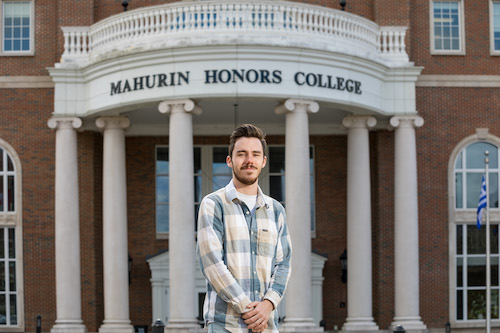 Nicholas Barth has a passion for inclusion and accessibility.

Arriving at WKU in the fall of 2018, Barth aimed to make a difference in the lives of others, especially those with special needs. He spent the past two years building connections in a world disconnected by a global pandemic.

Barth’s study abroad trip to Germany was cut short by COVID-19 in March 2020. “I received an email saying that I needed to take the next flight back to the U.S. because airlines were rapidly shutting down flights. I came back about a month and a half early and we did classes over Zoom,” he said.

Barth, a Psychology and German major and Mahurin Honors College student from Alvaton, joined the WKU Global Learning Ambassadors, and his passion for inclusion grew as he worked to create and strengthen connections on campus and in the community.

“I’ve gotten to meet so many different students, both domestic and international,” he said. “We’ve organized some really fun events. I’ve helped students figure out where they want to go abroad and help them prepare for that. It’s just been a really great way to give back.”

While travel restrictions kept students on campus, the Global Learning Ambassadors organized sessions between international and domestic students to share their cultures and experiences. “In a time where people couldn’t go abroad, we were able to keep students connected,” Barth said.

Barth looked for opportunities to make study abroad more inclusive and accessible to all students, especially LGBTQ, minority, first-generation or students with autism spectrum disorder. “It’s not a question of who can study abroad but it’s about how can we make that happen,” said Barth, who has worked with minority and diverse populations since high school.

“That’s something I have focused on. I make sure we are using inclusive language and our events are accessible to anyone who wants to come. This is something I want to continue focusing on in whatever I do, making sure everyone is included and that minority groups and groups that are not always accurately represented feel like they are included and that there are people in organizations on campus that actively want them to be involved.

“As a student, if you see someone like you in an organization, it makes you more likely to want to get involved. I’ve tried to make sure we do that on campus,” Barth said.

His WKU experience included an internship and student worker position at the Renshaw Early Childhood Center at WKU, often known as Big Red School, where he built relationships with children ages 1 to 6. Assisting children with and without disabilities helped Barth apply his psychology classes in a real-life setting and develop a well-rounded skill set. “It was a really good experience,” he said. “I absolutely loved it.”

Barth, son of Chris and Elizabeth Barth, will be recognized as the Ogden Foundation Scholar, WKU’s top undergraduate award, during spring Commencement activities on May 5-6.

"I was incredibly happy and very surprised,” Barth said. “I know some of the other applicants and they are all outstanding people and students, so I was very humbled and proud to be selected. I feel like it validated my college experience and the hard work I have put into it."

As Commencement approaches, Barth is focused on finishing strong. “I have grown to really appreciate WKU,” he said. “My experience has been significantly more impactful than I expected starting out as a freshman.”