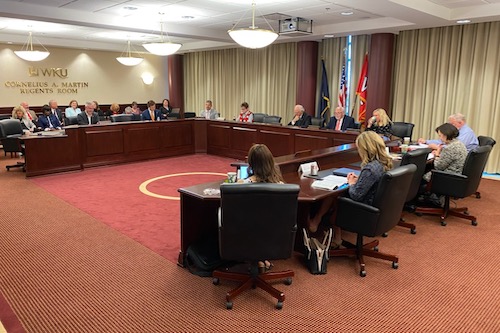 During committee meetings on Friday, April 15, the Academic Affairs Committee of the Western Kentucky University Board of Regents voted to award Provost Emerita status to Dr. Cheryl Stevens. Dr. Stevens served as Acting Provost and Vice President for Academic Affairs at WKU from April 2019 until her sabbatical leave on July 1, 2021.

Prior to her role as Acting Provost, she served as the Dean of the Ogden College of Science and Engineering from January 2012 until March 2019. As Dean, she established the Department of Psychological Sciences and the School of Engineering and Applied Sciences, supervised the design and construction of Ogden College Hall, and completed a redesign and renovation of Kelly Thompson Hall. She also served as President of the WKU Research Foundation and Director of the Applied Research and Technology Program. WKU President Timothy C. Caboni praised her leadership of the university’s science programs and her work as Provost to navigate WKU through the challenges presented by the COVID-19 pandemic. “She stepped into that role at a time when there was terrific uncertainty on our campus and helped confidently guide our faculty through that.”

The Academic Affairs Committee also approved a graduate certificate in Supply Chain Management, offered by the Gordon Ford College of Business. The certificate is expected to address current job market opportunities and assist regional partners in developing a talent pipeline. Dr. Dana Cosby, Director of the Master of Business Administration program at WKU, stated that the certificate will help prepare students for a market that is quickly evolving. “Business is changing at a more rapid rate than ever. What we’re seeing in the workforce is a need to respond to those changes very quickly,” she said.

The Executive Committee voted to approve a new facility for WKU’s softball and soccer programs. Currently, neither program has onsite locker rooms or indoor training facilities. WKU Director of Athletics Todd Stewart noted that in addition to locker rooms for both programs, the new facility would contain indoor training areas, including batting cages, and would match the high level of performance achieved by both programs in recent years. “This is a huge improvement over what we currently have. It’s really a win for everybody,” he said. The project will be funded with exit fee revenue paid to WKU by departing members of Conference USA as well as funds generated by the Hilltopper Athletic Foundation. No expenses will be paid from state funds.

Dr. Ethan Logan, Vice President for Enrollment and Student Experience, provided an enrollment update. He said that while the number of first-time, first-year students who have been admitted to the university is relatively consistent compared to this time last year, the number of students who have registered for orientation has increased by approximately 300 compared to this same date in 2021. Dr. Logan explained that students who register for orientation have a high likelihood of enrolling at the institution.

In other business, the Board of Regents Committees:

All committee approvals will be presented to the full Board of Regents during its second quarterly meeting on May 5.