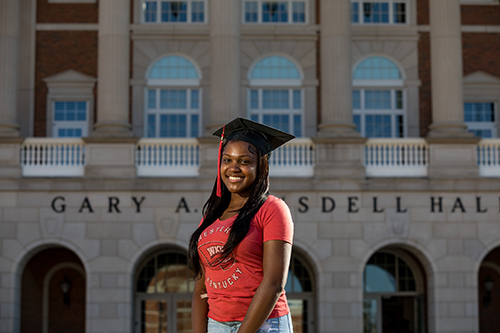 At one point, psychology major Shaija (Shy) Noelle Camp considered not attending college right after high school. Fortunately, she made her way to the Hill, and on December 11, Camp will graduate from WKU looking back on a college experience filled with leadership and hands-on learning experiences, a newfound sisterhood, and a great support system.

Camp, a Lebanon native, said, “WKU was the second university that I decided to visit, and once I arrived for my visit, I realized I loved the campus. Bowling Green was not too far away from home, but not extremely close either, which was perfect.”

Her high school curriculum gave Camp the chance to experience psychology courses before coming to college, and it became the program she wanted to pursue.

“Throughout high school I had the opportunity to take a few intro to psych courses, and I fell in love with them. I have always wanted to give back and help others in some way, but I knew nursing wasn’t the route for me. I decided to choose a degree in psychology because I wanted to learn more about behaviors and the way that people think in hopes to provide therapy for clients in the future and help them develop coping and problem-solving skills that allow them to show up as their best self and love themselves while doing it.”

Having a university and major selected takes some weight off a high school senior, but Camp’s loss of a loved one changed how she began thinking about life immediately after high school.

“Close to the end of my senior year of high school, my nana passed away which really impacted my overall well-being and mental health. For a while, I wasn’t sure that I would make it to college because I had so many life stressors going on at the time that I almost felt like I wouldn’t be able to come to WKU,” Camp said.

But she did. Camp enrolled and attended WKU that fall semester and does not regret her decision.

While at WKU, Camp diligently worked toward her goals.

“I have been employed at the [Lifeskills] Adult Crisis Stabilization Unit for the past year. At the crisis unit, we strive to help our clients through any crisis they have experienced. As a mental health technician, I conduct groups with clients, handle paperwork for the therapists, answer crisis line and suicide hotline calls, and ensure clients’ safety and mental stability while on the unit.”

Applied research also served as a hallmark of Camp’s time at WKU. “I had the opportunity to be a part of Dr. Thornberry’s Parent-Child Interaction Therapy (PCIT) research lab. I analyzed previous recordings of other families which has helped me to pay attention to behaviors and interactions between a parent and child.” Thornberry serves as an assistant professor in the Department of Psychology and director of the Doctor of Psychology program.

In addition to Thornberry, Camp recognized her advisor Dr. Lisa Duffin as an important part of her support system that contributed to preparing her for a future career. “Dr. Duffin has done an outstanding job preparing me for my future career. She would always be completely honest with me and push me to branch out and go to certain events or enroll in courses outside of my comfort zone. Challenging myself has helped me realize the importance of putting yourself out there because you will develop strengths you never knew you had.”

Camp also took the advice to get involved at WKU, which resulted in her joining the Kaois dance team and Zeta Phi Beta Sorority Inc.

“Kaois has given me the opportunity to meet lifelong friends while developing new skills. Prior to taking on positions with Kaois, I had never participated in anything that called for me to have a leadership role.” Camp served on the Kaois dance team’s operations department and now focuses solely on each team member’s academic performance, study hours, and areas of improvement in her role as academic and retention coordinator.

“In 2019, I became a member of Zeta Phi Beta Sorority Inc. which has helped me to develop better professional skills. Having the opportunity to work with other young women has been a great learning experience for me. One thing I really like about Zeta is that this will be a lifelong sisterhood even after graduation.”

“Thankfully, I have met such great people during my years here at Western that have helped me get through anything that has come my way. Without God and my support system, I probably wouldn’t be graduating this fall, so I am forever grateful,” Camp said.

For more information about majoring in Psychology at WKU, visit wku.edu/psychology/