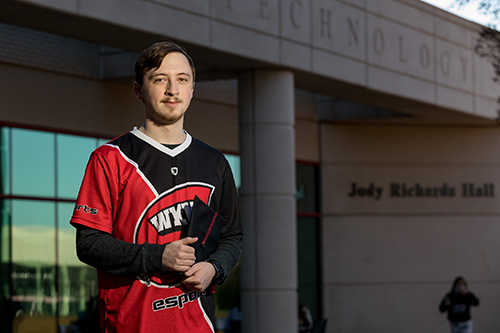 For Logan Stanfield, a senior from Maysville, an interest in technology shaped his entire WKU journey.

"Growing up in the age of the internet and mobile video, I constantly watched YouTube and movies on my iPod. I loved watching videos of a couple of guys creating short films that had visual effects that were just as good as big-budget films," Stanfield said.

As he prepares to graduate from WKU this week with a Bachelor of Arts in Film and a minor in Computer Animation, Stanfield directly links his choice of major to those early experiences.

"I was obsessed with YouTube channels such as FreddieW (now known as RocketJump) and Corridor Digital. Their films inspired me to learn more about the industry, and that's why I ended up choosing film," Stanfield shared.

When looking at options for college, Stanfield found a home within WKU's program. He noted that "WKU is one the few public universities that had a film degree as a major rather than a minor." While earning a Bachelor of Arts in Film, students can explore film production and film studies in tandem, broadening their knowledge of the field with one major.

Over the past four years in the program, Stanfield gained practical experience on live sets, knowledge of film union guidelines, and even some unique memories.

"As a Sound Mixer/Boom Operator, I am typically placed in very awkward spots in order to avoid being in the frame while still capturing clear audio. I have been crammed into the back floorboards of several cars throughout my career. Not that I didn't enjoy it, I think it's funny," Stanfield shared.

While he had the opportunity to work on various short films and visual effects projects, he highlighted a short film directed by one of his classmates as one of his favorite experiences.

"The film is called Spillway, directed by Jared Kunish. It was the last film I worked on while studying here and it was just good people, a good story and a smooth day. Not much more you can ask for on a film set."

He also incorporated his studies into his work as a part-time Service Desk Consultant with WKU Information Technology Services (ITS), creating short-form videos to address common technical support questions.

When reflecting on his WKU experience, Stanfield highlighted following his passion alongside his film program cohort.

"The best part has been being able to finally put my attention towards work I cared about doing rather than doing schoolwork just to get through school. I have loved working along with my cohort on films and watching us grow and evolve as filmmakers as time went on. I look forward to all my friends' future careers," Stanfield said.

Alongside his film studies, Stanfield also leveraged another technology-centric opportunity on campus. As a member of the WKU eSports team, he played the video game Overwatch against competitors from other universities. Joining the team during his first year on the Hill, he eventually became a varsity team member.

"When I began on the eSports team, it was in a reboot phase and only the Overwatch team was available. There wasn't a lot of advertising at the time, so my friend and I found the team by accident. We applied online, and soon after the semester started, we got an email and tried out. Before we knew it, he and I were on the team," Stanfield recalled.

Reflecting on his time on the team, he recalled one specific tournament from last year – the Battle of the Bluegrass, an Overwatch competition specifically for Kentucky collegiate eSports teams.

"We were the underdog of that tournament since we were ranked pretty low, but it was hard-fought, and we made it to the final match against the University of Kentucky. We didn't win, but I remember everyone still being very proud of how hard we fought," Stanfield shared.

Over his four years on the team, Stanfield also developed close friendships with his teammates.

"Because of the team, I have met lifelong friends who I cherish, and I wouldn't have these great friends if the eSports team hadn't brought us all together," Stanfield said.

Stanfield's minor in Computer Animation also ties into the world of video games and film studies.

"Visual effects involve a degree of knowledge in 3D computer animation, so I thought it fit well with what I wanted to do in the future," Stanfield shared.

After graduation, Stanfield plans to continue working at the WKU ITS Service Desk while pursuing personal film and animation projects.

For more information about the Bachelor of Arts in Film program at WKU, visit https://www.wku.edu/schoolofmedia/undergraduateprograms/film/film.php

For more information about a minor in Computer Animation at WKU, visit https://www.wku.edu/art/areas/comp_anim.php