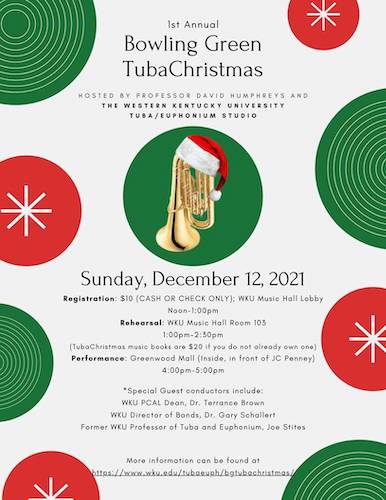 WKU’s Department of Music is adding a new sound to its holiday concerts with Bowling Green TubaChristmas.

“We invite everyone to come enjoy some holiday spirit with a different sound,” Humphreys said.

Humphreys, who came to WKU from the Dallas-Fort Worth area, has participated in TubaChristmas in several cities and is excited to serve as conductor for Bowling Green’s first TubaChristmas.

Merry TubaChristmas, created by Harvey Phillips, is celebrating its 48th anniversary in 2021 and will be presented in more than 300 cities in the United States and several other countries.

“We hope to establish a new tradition in Bowling Green,” Humphreys said.

The concert will feature holiday favorites Adeste Fidelis, Deck the Halls, God Rest Ye Merry, Gentleman, The First Noel, Good King Wenceslas, It Came Upon A Midnight Clear, Silent Night, Joy to the World, We Wish You a Merry Christmas, Hark the Herald Angels Sing, Carol of the Bells and Jingle Bells.

“We invite community members to come out and sing along. It should be a pretty fun evening,” he said.

Humphreys said all low brass players (tuba, euphonium and even trombone) are welcome to participate on Dec. 12. Registration will begin at noon at the WKU Music Hall lobby followed by rehearsal at 1 p.m. at Music Hall, room 103. Registration is $10. Details are available online at visit https://www.wku.edu/tubaeuph/bgtubachristmas/

Participants will be eligible for five prizes – best dressed, most festive instrument, farthest distance traveled, youngest participant and oldest participant. WKU will provide chairs and music stands. Carols for a Merry TubaChristmas will be available for $20 and $25.

All WKU campuses will be closed and classes canceled today, January 20, due to winter weather.