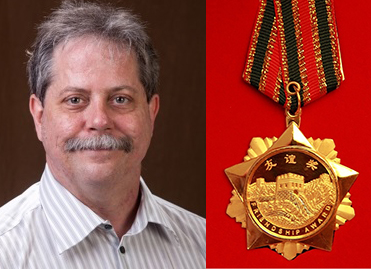 China’s Ministry of Science and Technology has announced that University Distinguished Professor of Hydrogeology Chris Groves of WKU’s Department of Earth, Environmental, and Atmospheric Sciences has won the Chinese Government Friendship Award, which is the People's Republic of China's highest award for "foreign experts who have made outstanding contributions to the country's economic and social progress.”

Dr. Groves, who directs the Crawford Hydrology Laboratory within WKU’s Applied Research and Technology Program (ARTP) has been working to understand, and to help solve problems in, water resources of southwest China for more than 25 years, during 39 visits. Establishing these relationships has been a partnership with his wife Deana, a WKU librarian. Southwest China has one of the world’s great karst regions, which are areas like southcentral Kentucky with soluble limestone bedrock where caves, sinkholes, and large springs are common. There are often serious water access and quality problems in karst areas. These are especially serious in rural southwest China, which has several of China’s poorest provinces.

Dr. Groves has secured more than $2 million of external funding through which he and numerous WKU colleagues and students, along with other partners in the U.S., China, and other countries, have conducted research and training in hydrogeology and the methods used to study water resources in these settings.

ARTP Director Dr. Cate Webb, who traveled to China with Dr. Groves in 2007 to help train Chinese hydrologists and university students, noted that “Dr. Groves is a dedicated teacher and scholar who is one of the most dynamic teachers and research scientists at WKU. His passion for research and teaching is clear. The guiding core of his passion is always his students, who experience the spirit of adventure, enthusiasm, and service which Dr. Groves freely shares.”

Along with the applied aspects associated with water supply challenges in rural Chinese communities, the program has a long history of collaborative science and research in geology and geochemistry. So far, Dr. Groves has co-authored 17 peer-reviewed scientific papers with Chinese colleagues. A number of these concern the impact of the geochemistry of limestone dissolution on the atmospheric carbon cycle, which has ties to climate change. Much of this work has been done within the context of the International Research Center on Karst (IRCK) in Guilin, China, where Dr. Groves has served on IRCK’s Board of Governors and Academic Committee since 2008.

A third aspect of the program involves resource protection, and in this WKU has partnered with Mammoth Cave National Park, the United Nations Educational, Scientific and Cultural Organization (UNESCO), and the National Park Service (NPS) Office of International Affairs to develop a Sister Park Arrangement with the South China Karst World Heritage Site.

“Chris and his colleagues,” said Rudy D’Alessandro, NPS International Cooperation Specialist in Washington, D.C., “have introduced and maintained a channel of cooperation and communication on common challenges in resource conservation between China and the United States that has proven to be durable, inclusive and invaluable to maintaining positive relations between our two nations.”

Dr. Groves and D’Alessandro, along with Mammoth Cave scientists, traveled to China in 2009 for the signing of the Sister Park Arrangement between the Mammoth Cave and South China Karst UNESCO World Heritage Sites.

The 2020 Friendship Award ceremony, which is usually held in the Great Hall of the People on Beijing’s Tiananmen Square, was cancelled due to the pandemic and the 2020 and 2021 awards were just recently announced. In 2017 Dr. Groves was with Deana in the Great Hall where President Xi Jinping awarded him the International Cooperation in Science and Technology Award of the People’s Republic of China. This is China’s highest award for foreign scientists and cited “great contributions to China’s hydrogeology and karst geology fields.”