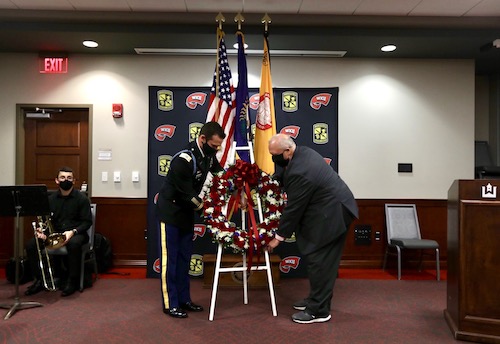 “Today, we come together to pay tribute to the Hilltoppers — students, staff, faculty and alumni — and the millions of Americans around the country who have served our nation proudly while wearing a uniform that represents a legacy of extraordinary men and women willing to sacrifice so much in support and preservation of our democracy,” Provost and Vice President for Academic Affairs Robert “Bud” Fischer said.

“Honor, integrity, and selfless courage are the heart of our brave soldiers. These heroes not only defend our nation and allies abroad they serve here at home. During the past two difficult years, military personnel have been called to support efforts in fighting COVID-19, to assist migrants in search of peace and safety, and to help citizens who suffered devastating losses during natural disasters.”

Due to rain, the wreath-laying ceremony was held inside the Downing Student Union, followed by the WKU ROTC Hall of Fame induction ceremony.

He also thanked Hilltopper ROTC cadets for choosing the Army Reserve Officer Training Corps and WKU to prepare them to be the next generation of great leaders. “But more importantly, thank you for putting service before self.  You are excellent examples of the WKU motto, ‘The Spirit Makes the Master,’” Provost Fischer said.