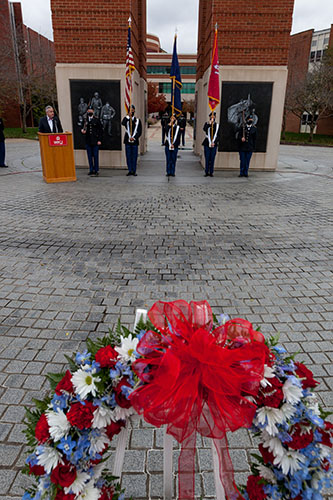 WKU will observe Veterans Day at 11 a.m. Thursday (Nov. 11) with a wreath-laying ceremony at the Guthrie Bell Tower followed by the ROTC Hall of Fame Induction Ceremony.

The Veterans Day ceremony will include remarks from Provost Robert “Bud” Fischer. (In case of rain, the ceremony will be held in Downing Student Union, room 3005.)

The events will follow WKU's Healthy on the Hill guidelines.

Here is information from WKU ROTC on this year's Hall of Fame inductees:

Bill was commissioned Infantry at the height of the Vietnam war. In short order, he was in combat as an infantry platoon leader. Bill earned a high award for valor during his 1967 tour as well as the Combat Infantry Badge, Airborne wings and a Ranger tab, later Jumpmaster certification. All of these set him apart in both the Army and in life.

Over the next years, Bill earned Aviator wings and Cobra/gunship qualification. He served another Vietnam tour flying Cobras and commanding a Cobra platoon in 3-17th Cavalry (Air). He was “engaged” by enemy ground fire—an oft used term for calling on all your skill to fight and survive.

Bill also did a number of vital jobs throughout his Army career, culminating in his selection to Colonel. He earned a master’s degree at WKU and later served in the ROTC Department. Under his tutelage and having recruitment responsibility, cadet enrollment tripled. This was unusual and highly notable in the mid-1970’s as the Vietnam war was winding down and military service was not popular. During his time at Western, he also advised and assisted the Pershing Rifle and Rebelette organizations, the latter winning a national drill competition.

While at Western, Bill did far more than serve as an ROTC faculty member. He was instrumental in increasing enrollment. This involved extensive travel throughout Kentucky—not unusual perhaps, but the accompanying message was. The Pershing Rifles, with Bill’s tutelage, organized the Charles Thomas Memorial JROTC Drill Meet; using this and other good messages about Western, Bill’s recruiting efforts in Kentucky high schools resonated—he spoke to several hundred high schoolers and prospective Western students over the course of his time at Western. One result was the tripling of ROTC cadet enrollment.

After Western ROTC duty, and as Bill became more senior and graduated from the Command and Staff College (roughly a 50% selection rate), he was involved in and made major contributions to many of the “big” things that happened to and within our country and the Army—and he was superb at all of them.

After staff college, Bill was posted to Iran (then an ally) to advise an Iranian aviation battalion. He arrived the day martial law was declared. The Shah was overthrown a few months later. Bill and his team were trapped by the Revolutionary Guard 250 miles from Tehran, where the Americans who could get to Tehran were assembled at the Hilton hotel. With resolute leadership and courage, Bill got his team to Tehran by commandeering a school bus and making their way through several Revolutionary Guard roadblocks. They got out on the last US evacuation flight.

The remainder of Bill’s active Army career was especially challenging. He served in increasingly demanding aviation and senior (Corps and Department of the Army) staff positions, earned Senior aviator wings and commanded both an attack helicopter company and a Combat Aviation Battalion.

Bill commanded the Combat Aviation Battalion of the 24th Infantry Division. He deployed to the National Training Center (NTC) at Ft Irwin, CA six times. The NTC is the gold standard of heavy force training. Most maneuver battalion and brigade commanders train there once or twice during their command tours. But a division has just one aviation battalion and it is often placed in the combat organization of a brigade combat team. Bill was at Ft Stewart, GA. Aviation units typically self-deploy to Ft Irwin. So not only did Bill train at the highest level with a large and complex unit, he safely moved the unit about 2500 miles each way. No small feat with rotary wing aircraft.

Bill’s last assignment was in the Pentagon. He was the Aviation officer for the Chief of Army Reserve (OCAR).

Upon retirement, Bill served as a High School ROTC Professor of Military Science in South Carolina. The program thrived under his leadership and example. Bill helped prepare and send a dozen students to the nation’s service academies and more than 50 earned ROTC college scholarships. Bill did more than lead the ROTC program. He led and energized several other domains and essential issues at Walhalla HS. Bill established and mentored the Key Club; he taught other classes, especially along the lines of service learning; notably, Bill played a major role in the school’s Southern Association five-year evaluation leading to recognition by the Department of Education’s designation of Walhalla HS as a New American High School showcase site.

John Casey Perkins (7/15/1918-1/17/2010) attended Western Kentucky University from 1936-1941. He was a member of the Kentucky National Guard and the WKU ROTC program.  John was starting center of the football team and a member of the Barons Fraternity, which became Alpha Tau Omega Fraternity, while working to pay his way through college.

John entered the Army as a Second Lieutenant in 1941 and served with the 30th Infantry Regiment of the Third Infantry Division, spending almost four years in foreign service during WWII. He was in amphibious landings at Casablanca, Sicily, Salerno, Anzio, and southern France and was awarded the American Defense Ribbon, Legion of Merit, Army of Occupation Award, EAME Ribbon with 10 bronze stars and arrowhead for 10 campaigns, Bronze Star Service Medal, Distinguished Unit Ribbon, American Theater Ribbon, WWII Victory Medal, Italian Cross of Military Valor, Army Commendation Ribbon, and WWII French Fourragere.  John served as S-2 and commanding officer of the 3rd Signal Corps and was one of the first Americans inside Dachau concentration camp at its liberation.  He was instrumental in the surrender of the German officer, Otto Skorzeny.  He separated from the service in 1947 as Lieutenant Colonel and was a member of the Retired Officers Association.

Bill Willis was born into a military family on 1 March 1945, where he assumed the role of military family member for the first 22 years of his life. Always good in school Bill carried that love of education with him to Western Kentucky University in the fall of 1963 where he majored in chemistry and mathematics. He was introduced to the Pershing Rifles immediately and he accepted the invitation to join. He immersed himself in his academic studies and in service to Company B-3, serving as a member of the drill teams, as the Color Guard Commander, and as the S-1 /Adjutant. His most challenging job that year was as the commander of the Rebelettes Girls Drill Team. Bill earned one of the first ever Army ROTC Scholarships attesting to his academic excellence.  For his senior year Bill was elected Executive Officer of the P/R company and was also the commander of the Scabbard and Blade company.  The cadre choose him to be the cadet brigade commander where he adeptly over saw two cadet battalions of over 500 cadets.

He met and pursued Sharon Roby after they were introduced by a Rebelette.  They became an item and Bill eventually won over the Homecoming Queen as his bride.

His first active-duty assignment after the basic course was with the 552d Artillery Group in Germany where he learned the practical skills of being a lieutenant. Not unlike most Regular Army officers of the day, Bill was reassigned to Vietnam in May of 1969. He was initially assigned to the 6/15th Field Artillery Battalion in Tay Ninh as an assistant S-3. In January 1970 assumed command of A Battery, 7th Battalion, 8th Artillery. He was in direct support of an Australian Task Force in the Parrots Beak Region.

After Vietnam he attended the Canadian Field Artillery Officers’ Advanced Course.  While at the course he shared how to defend a circular firebase based upon his experiences in Vietnam. He also completed the Canadian Jump School earning his Canadian Jump Wings.

Before the end of the Canadian Career Course, FA Branch tapped Bill to attend the University of Texas at El Paso for a master’s in mechanical engineering. After earning his degree, he went on to Ft Bliss. There Bill served as the Soviet Air Marshall and planned Soviet air attacks on the Fulda Gap region of Germany in a US Army generated simulation. He wrote FORTRAN programs detailing the Soviet attack plans utilizing real life aircraft attack capabilities and tactics. He was offered a chance to command again at the captain level.  He commanded the Howitzer Battery, 2d Squadron, 3d Armored Cavalry Regiment where he tested the new Copperhead round. His work had a major impact on the fielding of the Copperhead and the other weapons systems he worked on.

His final assignment in his 21 career was to HQDA as the Executive Secretary for the Army Systems Acquisition Review Committee. After his 21 years of Active Duty, Bill began second career in what he believed he was born do and that was to teach. His highest recognition was given by the Governor of Virginia when he was selected as the 2006-2007 Virginia Teacher of the Year in Virginia Education Region IV.

Bill was never one to sit by idly and let the world pass him up.  Became a Master Gardner and he and Sharon both currently serve with the Department of the Interior Fish and Wildlife Service helping to maintain three local National Wildlife Refuges and assist visitors to those areas. His teaching continues as a volunteer in the refuge centers.

Bill Willis’s entire adult life beginning at WKU has been about selfless service to others.