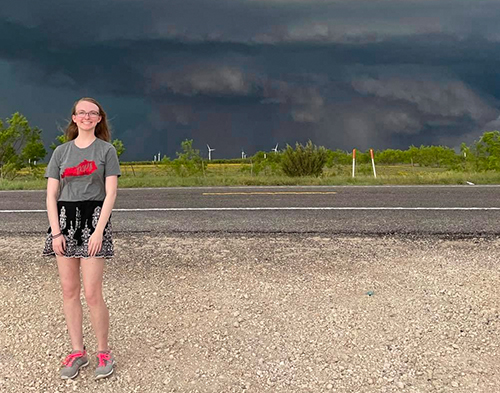 WKU senior Caity Frederick of Lexington has received a national scholarship from the American Meteorological Society.

Frederick, a double major in Meteorology and Dance, is the 2021 recipient of the Liv and Walt Lyons Senior Named Scholarship. She will receive the $2,500 scholarship award in January at the annual AMS Conference in Houston.

“I have learned so much from the Meteorology Program,” Frederick said. “The program has taught about more than just the weather; it has taught me how to become a leader and apply what I learn in class to the real world.

“Being at WKU has allowed me to explore both of my passions for weather and dance as well as get involved with other organizations.”

Frederick serves as the Lead Forecaster for White Squirrel Weather, is the senior researcher for the ARTP Disaster Science Operations Center and is the Vice President of the Student Chapters of the American Meteorological Society and National Weather Association. She has worked as a Teaching Assistant for the Introductory Meteorology Lab course and participated in the 2021 WKU Storm Chase course.

“The Meteorology Program at WKU provides students with a wealth of applied learning and research experiences,” said Dr. Josh Durkee, Professor of Meteorology and University Meteorologist. “Most students take advantage of many of these opportunities to gain practical, experiential career training but Caity found a way to be involved in everything and maintain excellent performance along the way. Caity has been an exemplary student in the Meteorology Program and it makes perfect sense that she received this national recognition from the AMS.”

Frederick’s interests in weather and dance began in her childhood.

“I started dancing when I was 4, so I don't remember how I became interested in dance, but I continue dancing because I love it,” she said. “At a young age, I was terrified of thunderstorms. Once I got a little older, my Dad and I would look at the radar together to see when the storm would pass. I slowly became more interested in understanding the weather.”

After graduating from WKU, Frederick plans to pursue graduate school and a career path toward broadcast meteorology.

“I have enjoyed being a part of both the meteorology and dance programs. Being a part of both is definitely time consuming. Dance seems to require more of a time commitment due to the rehearsals for shows, which happen outside of class. I'm lucky I have been able to be very involved in both my majors as well as graduate in four years. Sometimes it is a struggle and I have to make sacrifices, but it is all worth it in the end. The teachers in both programs are very caring and understanding which helps, too. They help support me in many different ways.”

Frederick is the WKU Meteorology Program’s eighth recipient of a national AMS scholarship since 2013. Her other awards include the Dr. L. Michael Trapasso Rising Senior Scholarship within the Department of Earth, Environmental, and Atmospheric Sciences and the Patricia Frist Memorial Scholarship from Scholarship America.

“This award speaks to the competitiveness of our Meteorology major’s high-quality program and applied learning opportunities,” said Dr. Leslie North, Interim Chair of WKU’s  Department of Earth, Environmental, and Atmospheric Sciences. “We are so proud of Caity and all that she has accomplished at her time at WKU. The future is bright for this young scholar.”