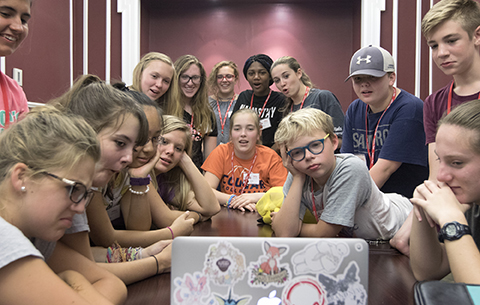 Nearly 190 students from 12 states will participate in VAMPY June 24 to July 14 at WKU.

Next week marks the 35th year The Center for Gifted Studies has offered the Summer Program for Verbally and Mathematically Precocious Youth (VAMPY) and the Advanced Placement Summer Institute.

VAMPY runs from June 24 to July 14 and brings nearly 190 students from 12 states together on the campus of WKU for a rigorous educational environment where students immerse themselves for six hours a day in a topic of their choosing that ignites their curiosity. Since 1984 VAMPY has brought together students from counties around Kentucky, states across the nation, and countries all over the world that are united in their love of learning and academic challenge.

Classes include Nazi Germany and the Holocaust, Arabic, biomechanics and computer science. When not in class, students participate in sports, cookouts, talent shows and other activities designed to foster friendship and build bonds between participants. Many students find VAMPY to be a life-changing experience with many returning for multiple years. With such a long-running program, there are now second generation campers attending.

The Advanced Placement Summer Institute (APSI) at WKU runs from June 25 to 29 and brings nearly 400 teachers from dozens of states together for a week of training to help them understand and prepare for the demands of the advanced placement classroom. The Center for Gifted Studies has offered the Advanced Placement Summer Institute since 1984, making it one of the longest-running College Board-endorses institutes in the country. In addition, with more than 9,000 teachers from all 50 states and numerous foreign countries as past participants it is also one of the largest events of its kind.

The APSI offers a range of courses like English Language and Composition, United States History, French Language and Culture, and Music Theory. This range reflects a commitment to building an institute devoted to the needs of many teachers and to creating an atmosphere where learning comes in many forms. Participants embrace the notion of excellence in teaching and learning that they can put into practice in their classrooms.