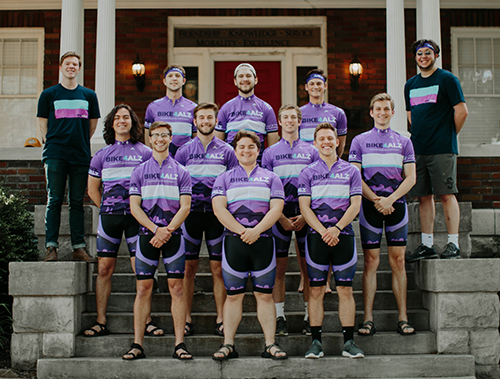 Eleven members of a WKU fraternity will make the sixth Bike4Alz cross country ride this summer to raise money for Alzheimer’s research.

The members of WKU FIJI (Phi Gamma Delta) are riding with the 501(c)(3) nonprofit organization Bike4Alz, which was founded by WKU students in 2010. The previous five teams have biked over 13,000 miles and raised nearly $250,000 for research.

The group plans to bike May 17 to July 23 from San Francisco, California, to Virginia Beach, Virginia, and raise $50,000. In Kentucky in early July, they will make stops in Paducah, Bowling Green, Elizabethtown, Louisville and Lexington. (View the Bike4Alz calendar.) For updates on social media, follow Bike4Alz on Facebook, Instagram and Twitter.

There is no known cure for Alzheimer’s, a disease more than five million Americans live with. One in three seniors dies with Alzheimer’s or another form of dementia, according to the Alzheimer’s Association. For information or to make a donation, visit www.bike4alz.org.