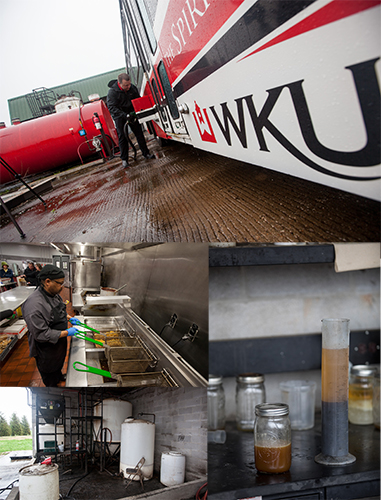 Engineering students (WKU Biofuels) convert cooking oil previously used to prepare French fries, chicken and other favorites in campus restaurants to biodiesel at a facility at the WKU Farm.

WKU Biofuels has been converting campus dining used cooking oil into fuel at the WKU Farm since 2013. The biodiesel has been used to run tractors, reducing farm fuel costs and carbon emissions. The collaboration between Agriculture and Engineering programs engages students in real-life problem solving – the facility was designed, built and is operated by students in the Mechanical Engineering program.

The students retrieve the used cooking oil from dining locations on campus and transport it to the WKU Farm, where it undergoes a process of heating, drying and mixing with methanol and lye (known as methoxide) in a process called transeserification. The methanol and vegetable oil are turned into biodiesel and glycerin. The byproduct glycerin is removed and the lye is washed from the biodiesel, which is then dried and after final testing is ready to be used as fuel.

The benefit of this entire process is that vegetable oil (which has already been used for its main purpose of feeding people) and one gallon of a traditional hydrocarbon (the methanol) can be converted into nearly five gallons of biodiesel — making it unnecessary to burn those gallons of traditional diesel fuel. The conversion of used cooking oil to biofuel eliminates the oil as waste and converts it to a clean burning fuel, significantly reducing carbon emissions and other environmental impacts.

“WKU Restaurant Group is proud to be a part of this program,” said Steve Hoyng, Resident District Manager, Aramark. “Expanding this program to include buses shows our commitment to recycle/reuse. Providing transportation to get students to classes by converting used fryer oil to biodiesel proves we can do great things when everyone cooperates. This cooperation will help WKU succeed in being even more sustainable in the future.”

Having produced more than 5,000 gallons of biodiesel, WKU Biofuels students and staff are experienced in the process and ready to take the project beyond the farm and onto the WKU campus.

WKU Parking and Transportation Services will use the converted cooking oil to fuel shuttle #13, which runs the White Line. While riders will not notice any difference in the shuttle’s performance (except maybe the faint smell of French fries), educational information on the bus will promote awareness among passengers of the significance of the bus as a sustainability best practice.

A “name the bio bus contest” will be conducted next week as part of Earth Week, and special bus-related surprises for riders are planned during the annual WKU Earth Day Festival on April 19. More: Read more about the Earth Day Festival.

“Topper Transit is a proud partner in the WKU biodiesel project. This is an exciting first step that will promote better environmental sustainability and reduce our carbon footprint in the community,” said WKU Assistant Director of Transportation Tim McWhorter, who has been working with the biofuels faculty and students on the collaboration. “Every partner in this project is truly excited to be involved. The used cooking oil from campus dining services is donated so students can gain experience converting the used cooking oil to biodiesel. The biodiesel will fuel one of our buses to transport students around campus. That is the truly remarkable aspect of this project: students are involved from start to finish!”

The WKU biodiesel project is educational experience at its best: real-life problem solving with applications that will carry graduates into future successes, improving the quality of life of on our farm and in our community.

“The WKU biodiesel project was a valuable hands on capital project experience that helped to lay the foundation for my ensuing career in chemical engineering,” said Ryan Simpson, a 2008 graduate of WKU’s Mechanical Engineering program. “I am very grateful for my time spent on this effort and found it to be quite rewarding both personally and professionally.”

Veronica Pierre (mathematics and psychological sciences) is one of two students who have been awarded the Connie Foster Student Scholarship for the 2022-23 academic year.