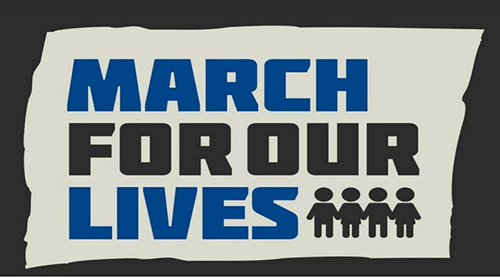 On Saturday (March 24), the March for Our Lives movement will take to the streets to demand that we end the epidemic of mass shootings in our schools and community. Bowling Green will be one of the more than 581 cities gathering to demand action. Participants will gather at Cherry Hall on WKU's campus at 11 a.m. and march to Fountain Square Park where a series of speakers will highlight the importance of action on gun reform.

“While the March for Our Lives movement was spurred by an act of violence that has become all too common, we want to make the day about a broader understanding of gun violence,” said Aeryn Darst, Program Support Specialist for WKU’s Center for Citizenship and Social Justice, which is organizing the march. “There are so many communities and populations that have been scarred because of how easy it is for evil people to get their hands on a gun.”

Already lined up to speak on gun violence is Haley Parker-Rinehart, a Bowling Green organizer for gun reform advocacy group Moms Demand Action for Gun Sense; Pastor John C. Lee Jr. of Mount Zion Baptist Church; Veronica Reed of the Black Lives Matter movement; and Jeremy McFarland, intern for WKU’s Pride Center. These four will be joined by other speakers in the days to come.

The Center is working to make sure the voices of young students are heard during the process as well. The national March for Our Lives movement began with high school students in Parkland, Florida, speaking out after their school was impacted by gun violence. Community members, particularly students, interested in contributing to planning the event are encouraged to reach out to the Center for Citizenship and Social Justice either by email at ccsj@wku.edu or Facebook. The last planning meeting for the march is scheduled for 5 p.m. Wednesday (March 21) at the office of Kentuckians for the Commonwealth (KFTC), 958 Collett Ave., Bowling Green.

About the Center for Citizenship and Social Justice: The CCSJ is a program of WKU's Department of Diversity and Community Studies. The Center is committed to providing academic and extra-curricular experiences that empower WKU students, faculty and staff to address complex social issues in partnership with the communities we serve.