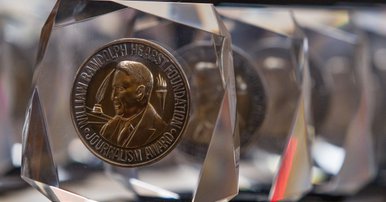 Four WKU students have been honored in writing and multimedia competitions in the 2017-2018 Hearst Journalism Awards Program.

Nicole Ares, a May graduate from Versailles, finished second in the Enterprise Reporting competition and received a $2,000 award. Michelle Hanks, a senior from Chattanooga, Tennessee, finished sixth.

After the second of five writing competitions, WKU is third behind Indiana University and University of Nebraska-Lincoln.

Often called “The Pulitzers of college journalism,” the Hearst Journalism Awards Program, in its 58th year, five writing, two photojournalism, one radio, two television, and four multimedia competitions offering up to $700,000 in scholarships, matching grants and stipends; 105 member universities of the Association of Schools of Journalism and Mass Communication with accredited undergraduate journalism programs are eligible to participate in the Hearst competitions.